New Years Eve in Amsterdam…we had no idea what to expect! On many occasions we were told that the Dutch love their fireworks, and hearing them go off randomly for a few days leading up to NYE proved that. But nothing could prepare us for what came about on December 31, 2014.

An awesome little cocktail bar called Hiding in Plain Sight planned a NYE Canal Cocktail Cruise and we felt that we just HAD to go. Well, I don’t know if we’ll go on another one as it was rather crowded. But the bonus was that we were on the water and ended up doing part of the Water Colors part of the Amsterdam Light Festival. Remember how I said the Dutch love their fireworks? Well, some folks shot some off canal-side right over our heads. It was so cool!

Later in the evening we were expecting to go to a party in the south of Amsterdam. Little did we know that the city shuts down all public transportation from 8:00 pm until 1-1:30 am on New Year’s eve. NOT COOL. So, instead, we stayed home listening to the fireworks for a bit with plans of  going up to our rooftop at midnight to see what all the fuss was about.  Well, to be honest, it was the most spectacular display we have ever seen!

The City of Amsterdam has their fireworks display near Central Station, most everything else is neighborhoods and other groups getting together and putting some off. So, when we got on our roof, we could spin around 360 degrees and stop anywhere and see fireworks. Then our neighborhood got in on the action and they were next to us and above us, and we stood there in awe just smiling and laughing. It seems insane!

It was so loud! It really sounded like what I would assume what a warzone would sound like. Just pop-poppop-pop-pop-poppop. Constantly.  For several hours!  I even got out my noise-cancelling headphones! Obviously it doesn’t cancel anything, but it does help muffle it! When our neighbors started with the larger displays, I actually got hit with a little bit of debris. The stuff goes everywhere! Our roof hatch was open and the red debris got all over our inside stairs too. But the clean-up was well worth it.

Where you did you spend new years? Do you have any resolutions you want to share? 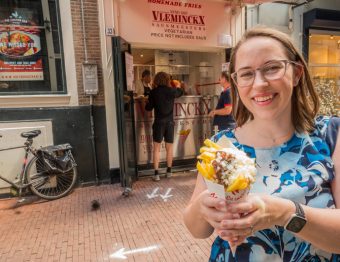