I live in Amsterdam. I love Amsterdam. It’s such an amazing city with the canals as the perfect backdrop of a sunny day.

BUT…and this is a big BUT…it’s not all that there is to see in the area. While there are day trips to other cities like Delft, Utrecht, and The Hague, you really don’t have to go far for a new adventure. Just hop on a bike and take a tour from Amsterdam into the countryside with We Bike Amsterdam. 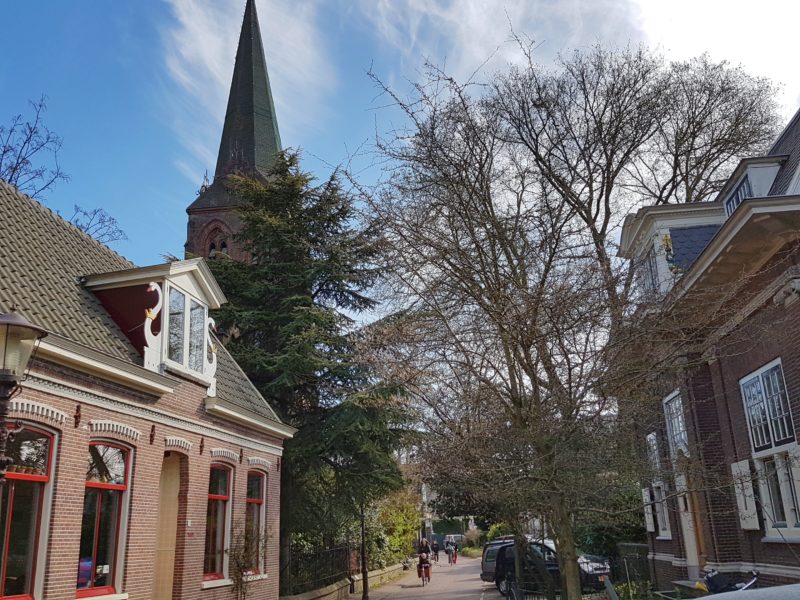 Biking tours around Amsterdam was never really on the list since, you know, I bike around pretty often. But I was offered the chance to go on a countryside tour from Amsterdam by bike with We Bike Amsterdam. Ummm, YES! Let’s get out of the city!

I think you should always take advantage of what you have right around you. We usually miss it because, you know, it’s there, it will always be there. So why do I need to bother going now? If you think like that, you will likely miss out.

I’ve never biked from Amsterdam to anywhere else. I haven’t really even biked that far before. I was a little nervous (would I have the stamina?) but super excited because I finally get to see the countryside that is oh-so-beautiful.

Update: We cycled to Edam and back!

While I want to write about the experience so you know what to expect (that’s usually kind of the point on a blog), I really just want to tell you to book it. Don’t ask questions. Just go! That’s how much I loved this tour around the Amsterdam countryside. 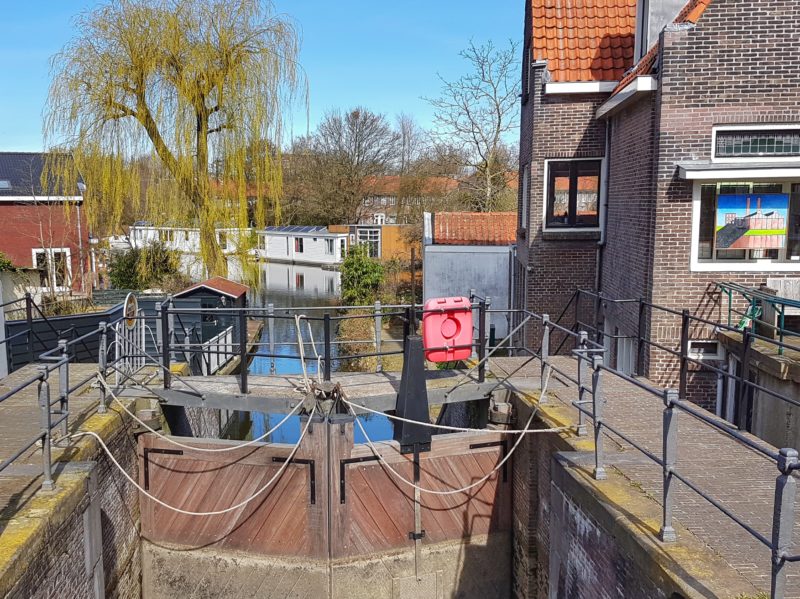 Meeting up was super easy. The shop where you grab your bike from is right by Central Station. It’s easy to find and there’s a bike waiting for you!

Since I love my bike (it’s purple), I brought mine with me. SUCH an Amsterdammer ;), I know.

After a quick introduction of the guide and an adjustment of seat heights for those who need it, we learned our itinerary. Let’s just say that it involves biking around impossibly adorable areas and eating appeltaart (like an apple pie/cake combo).

And with that, we were off! We headed behind Central Station to grab a ferry and go north. The ferry itself is pretty awesome. The views are incredible! And it’s free…just in case you want to take it again on your own. 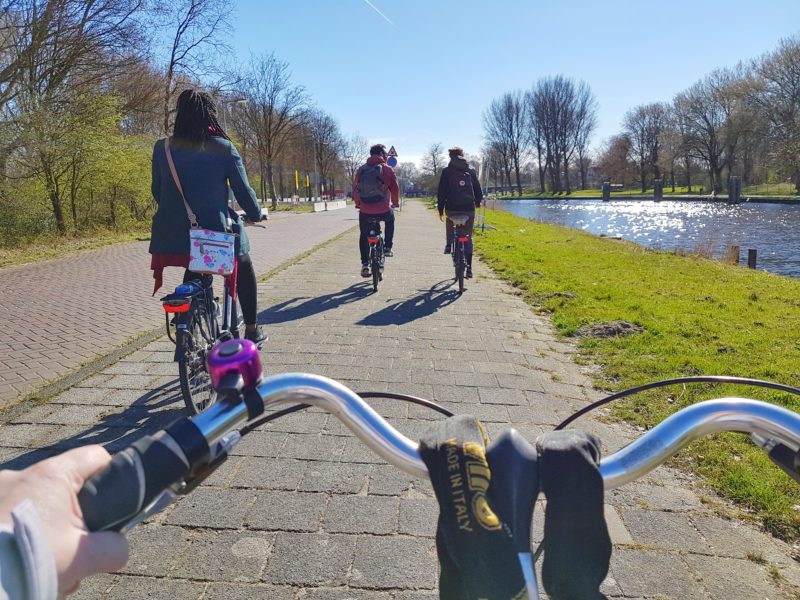 Cycling in the countryside

Once on the other side of the IJ (that body of water the ferry is in) you hop on your bikes and won’t see another stop sign or stoplight until you get back to Central Station.

I had a smile on my face the whole time. It was a perfect sunny day in the Netherlands and was thrilled to be taking advantage of it and the natural, and not so natural, scenery.

This bike tour was so chill. The guide from We Bike Amsterdam would stop every once in a while to point something out. You could stop and ask questions. You can next to the guide or another tour-goer and have a chat. 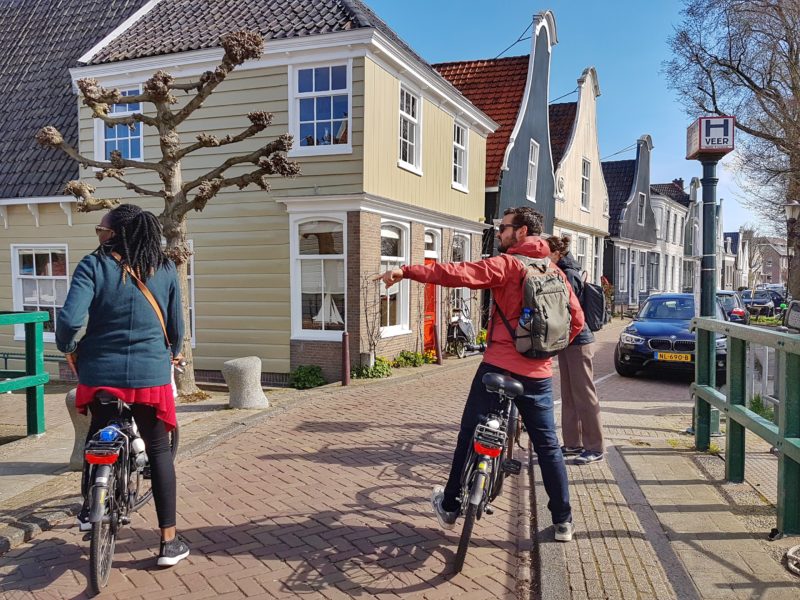 Small, but at the time, terrifying, note: I took my camera out to take the first photo and DROPPED IT! Turns out only the filter broke and just a small crack on the casing, so it still works. But, with glass everywhere and wanting to enjoy the trip, I just took photos with my Galaxy S7. Apologies if the quality isn’t a high as normal!

The Dutch are masters of water and you get to see some pretty cool examples of that throughout the trips. From locks, to dikes, to irrigation canals, the Dutch control water like nobody else. Be prepared to be wowed!

Of course, the animals love the water too and you might see a few cute sheep along the way like we did. How cute are these babies?! They were flaunting it for the cameras. EVERYONE stopped to take pictures. Even the locals. 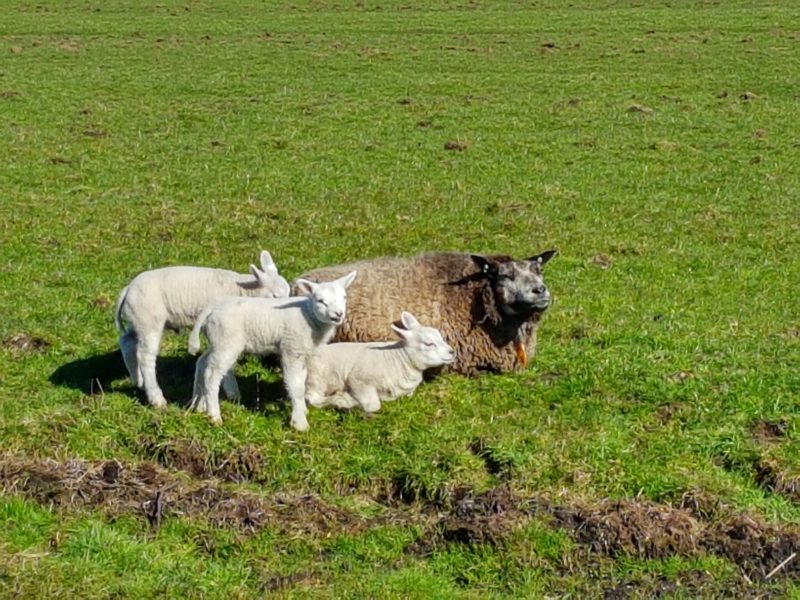 These views though. It felt amazing to be cycling alongside the water. I’m usually a woods kind of girl, but I love bodies of water too. Something so peaceful, so calming about them.

At some point, after freeing my mind of all thoughts and just pedaling away, it was time to make a left and head to a cute restaurant called het Schoolhuis for a traditional Dutch treat…the appeltaart! I hesitate to call it apple pie. It’s more like a cross between a pie and a cake. However you want to describe it, it’s delicious. Just be sure to get it with cream on the side. It’s extra delicious that way! 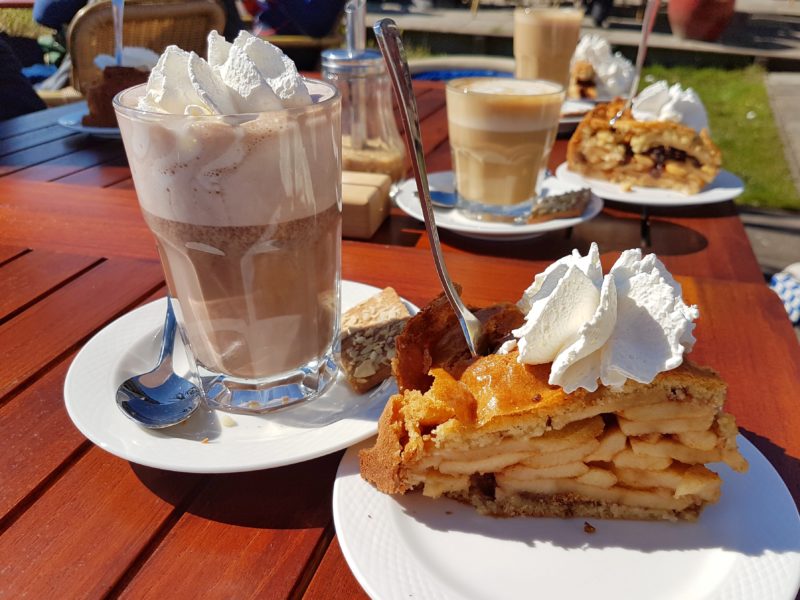 After the pie/cake/taart and coffee/tea/hot chocolate, it was time to saddle back up and start a roundabout journey back to Amsterdam. The difference in scenery was nice. We weren’t along the water anymore, but among the villages and fields. We were even lucky enough to be on the cycling tour during Open Tower Day. We took advantage of that and went up the Ransdorper Toren (tower) that was never quite finished, but had a great view! You could see for miles since this country is super flat. It was such a nice surprise to be able to do that and it’s a shame they only hold Open Tower Day once a year. 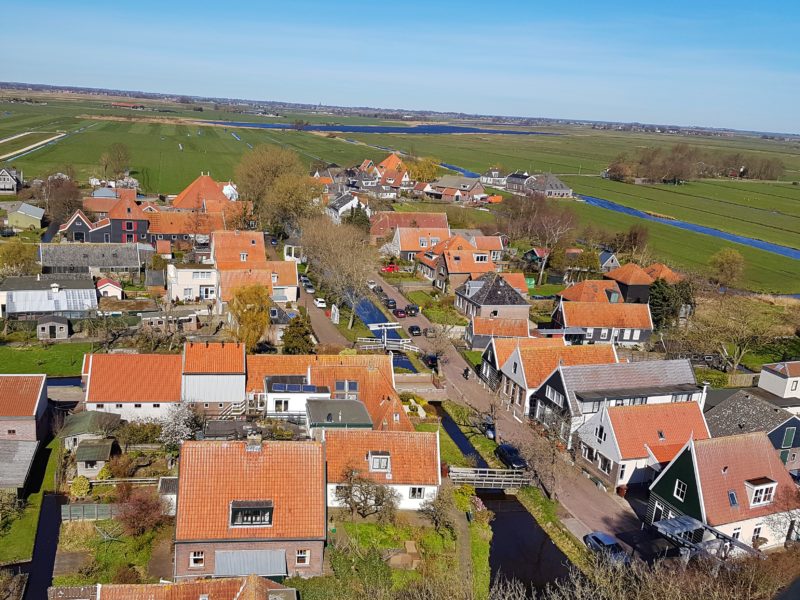 Before getting back into Amsterdam “proper” we stopped to take a few photos with a windmill. It even has a name! “De Admiraal”. It’s a must to have a selfie in front of a windmill if you are visiting, right? 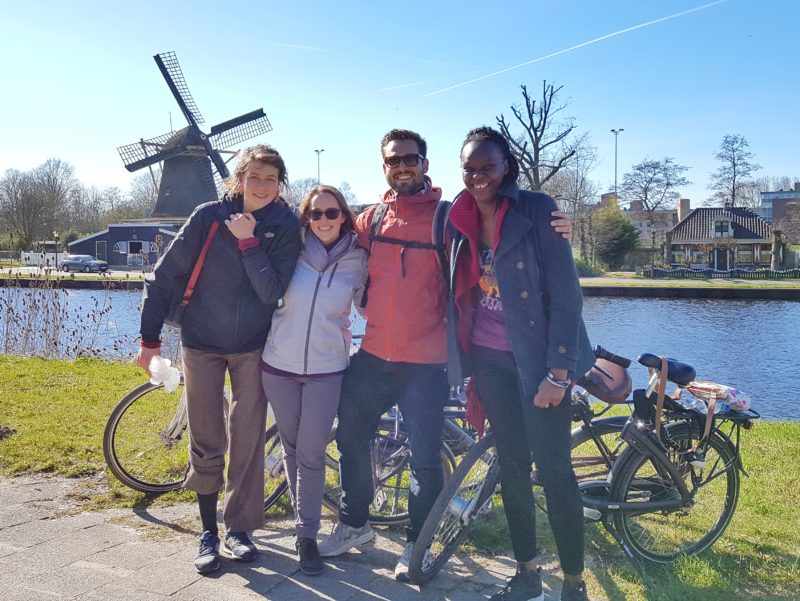 After so many cute villages, meeting some animals along the way, getting a snack, and making friends, it was time to cross the water and get back to the “big” city of Amsterdam. Totally kidding about the “big” part. It feels like a village in itself!

Cycling on the country paths and feeling that sense of freedom is just incredible. While I feel so fortunate to be able to do that anytime, I hope you take advantage of the opportunity if you’re visiting my favorite place 🙂 I am fairly certain it would be a highlight of your trip! 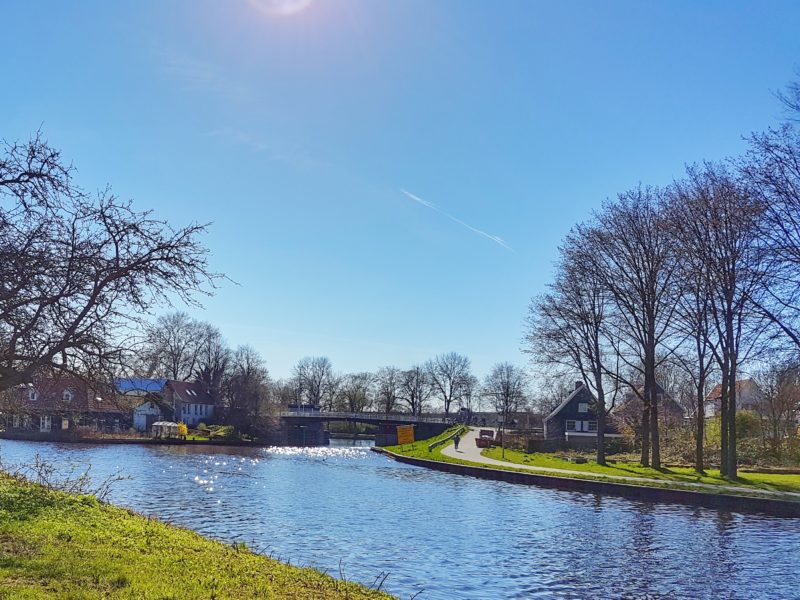 When you do come to Amsterdam, do check out the city guide I made for you, and while I know you have a couple things on your must-do list that every visitor “should” do, make a random turn down a street when you’re walking and find something new and interesting. 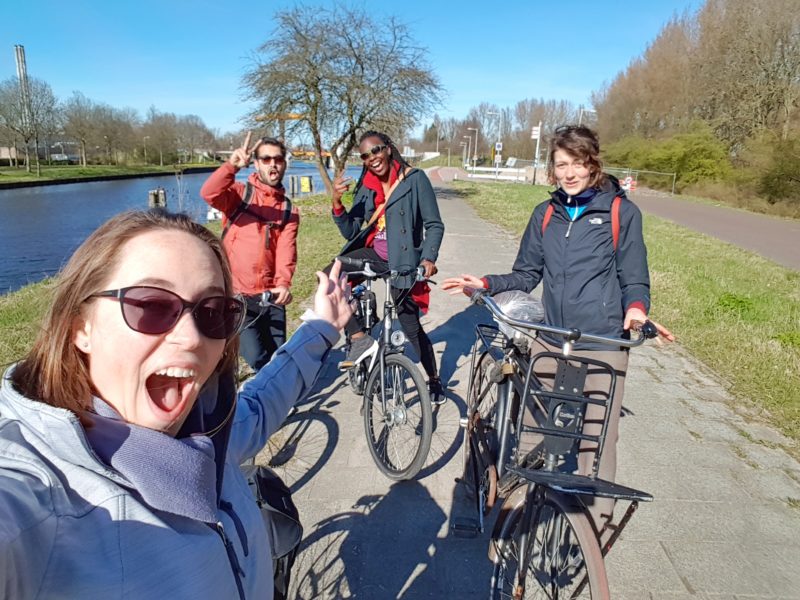 This was a complimentary tour thanks to We Bike Amsterdam, which I thoroughly enjoyed. All opinions are my own and I am so grateful for the opportunity to experience this tour so I can share it with you!

Jessica is an American who decided it was time to live life to the fullest. For her, that meant moving abroad and traveling as much as possible. Her passions are festivals that showcase the local culture, food that is made with love, and wine because it's awesome.
PrevPreviousPortuguese food tour in Lisbon
NextOur surprise travel anniversary traditionNext