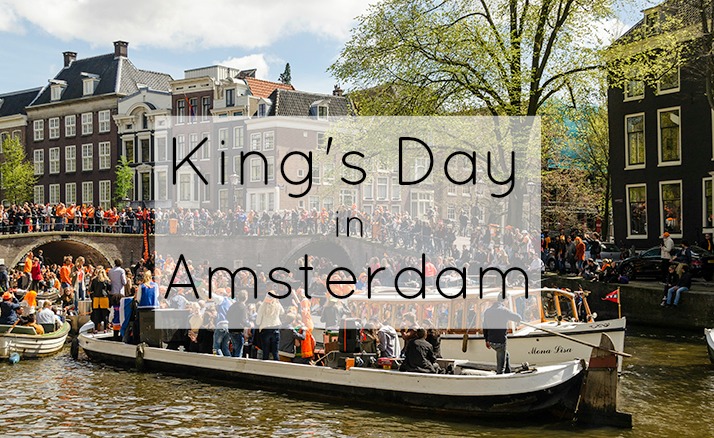 King’s Day in Amsterdam is the biggest party we have ever been to. With a beautiful spring day we were able to experience the best that King’s Day had to offer.  Learn how to make this year, the best King’s Day for you!

This city-wide festival/party/yard sale was such a unique event for us. We have never seen an event so big that the population nearly doubles; an opportunity so available to sell whatever you want; and a birthday so celebrated that everyone wears the same color. If you want to see the action, we posted a video to share the awesomeness. It makes me happy each time I see it, so I hope it makes you smile, too.

Related: How YOU can have the best King’s Day!

All over the city there were people in orange suits, orange boots, orange…everything! And you wouldn’t have to go far to purchase something orange either. This is prime time to sell just about anything. There were food carts along Damrak and throughout the canal belt. Stores put a table or bar out front to sell drinks of all kinds. We even saw a little girl with a tray selling cupcakes for one euro in the Jordaan. And the amount of junk on the sidewalks was crazy! Considering that the Dutch are known for being somewhat cheap, I’m amazing that anything gets sold at all. 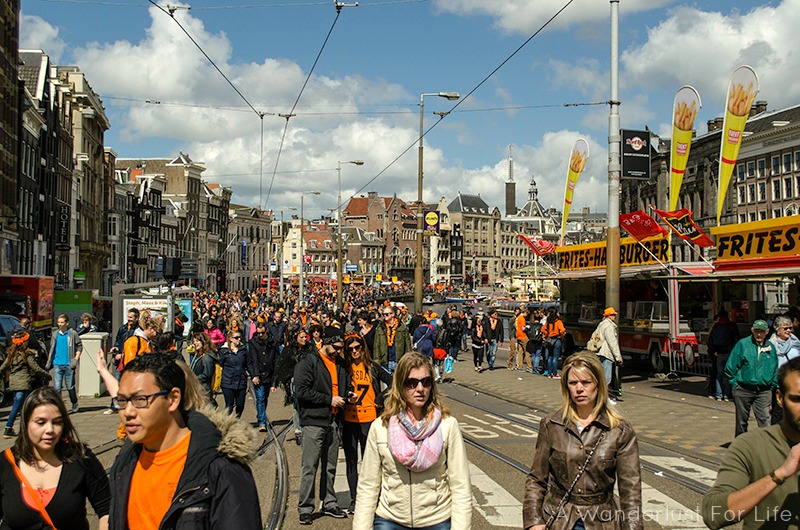 Within the canal ring there were practically no cars or bikes, just people. So it was really easy to get around. And when you did see a bike or car, they knew they were at the bottom of the totem pole for that day. It’s all part of the charm–just walking along the canals and in the middle of major roads. It felt so strange walking on the tram tracks on Damrak…I kept looking over my shoulder! But when all of Dam Square is filled with a carnival and you see the very tall rides, you forget about all of that. 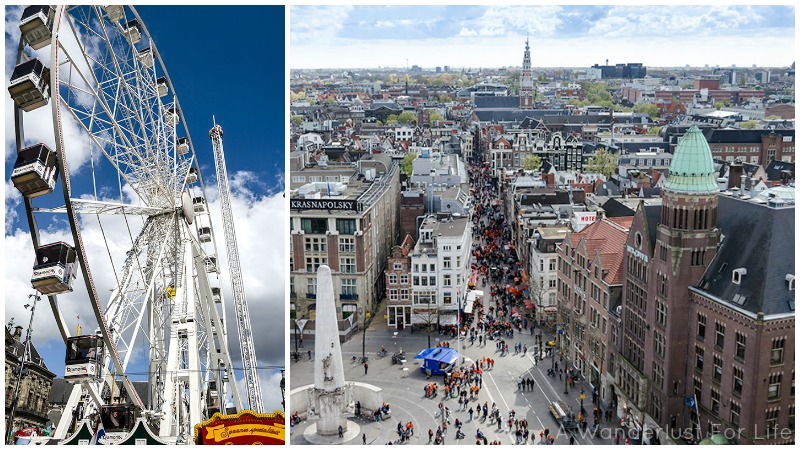 We have seen various carnivals on Dam Square before but have never been on the rides. They just seem to pop up. I realize they must have a schedule and someone knows they are coming, but usually I’m biking somewhere and spot the cluster of bright lights and tall contraptions. This time, though, we wanted to get above the city…so we did! Up on the Ferris Wheel we went and it was beautiful! The dark clouds cleared and we had an amazing view. I wish I could go up there everyday! 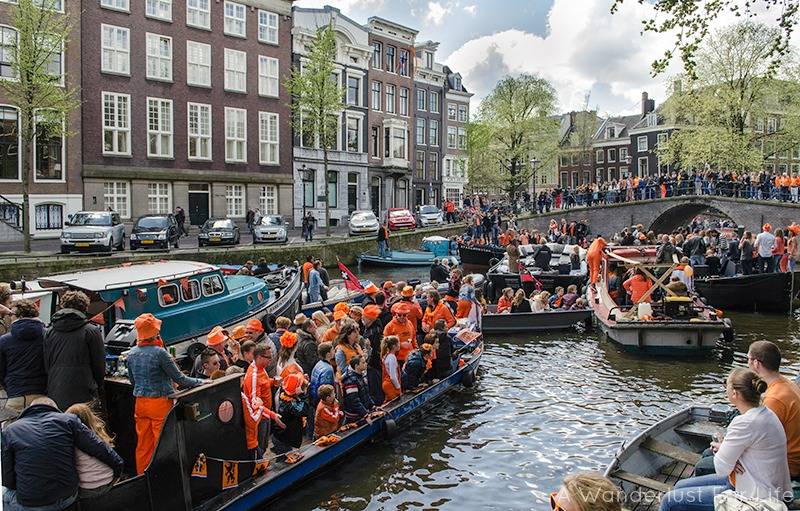 That was only the beginning though. After running into some friends in the center (yes, it feels like a small town sometimes) we made our way to Herengracht to watch the parade of boats. It was so mesmerizing that we found a spot on the wall of the canal to just sit and enjoy. I have no idea how long we were even there. While watching the overloaded boats filled with people in orange blasting dance music, we actually saw a friend of our DJing on one of the boats! What an experience! Hopefully we’ll get on a boat next year. 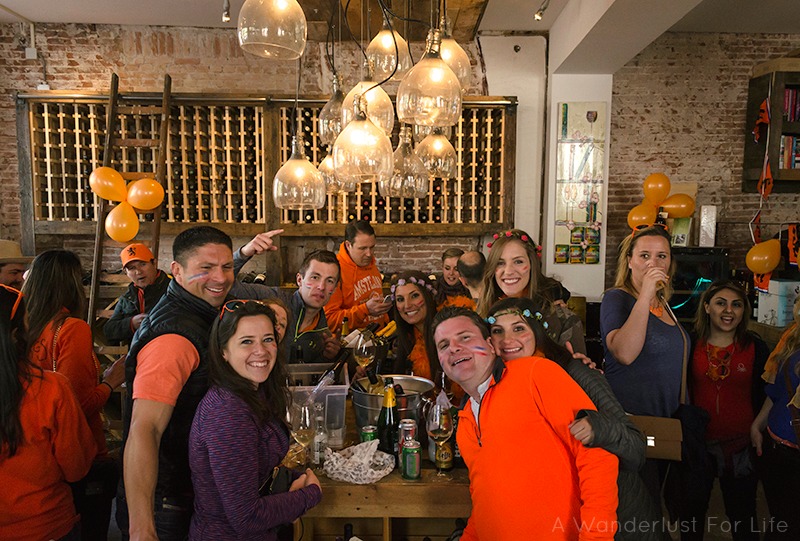 After all of that, we were ready to go to our own party. The Library is one of our favorite spots in Amsterdam and they had a party for Library Club members, so we went to have some wine, meet new people, and have a great time! It certainly did not disappoint. We love our new city and the people–they know how to have fun. Thank you Amsterdam for a wonderful first King’s Day! 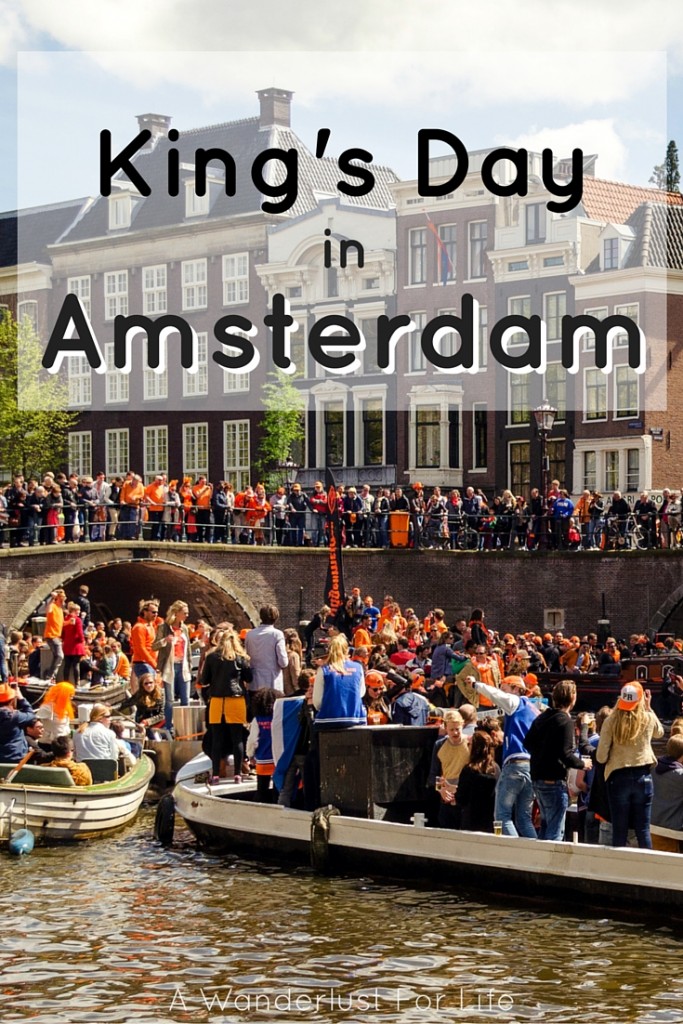