My 2017 year in review is very much a reflection of how I felt about the year, the blog, and general life. It was a strange year for sure. My focus was all over the place…which, I guess, really means that I didn’t have much focus.

The first 3 months of the year was a whirlwind due to us spending every possible moment looking for a house to buy in Amsterdam. Funny story, I found a house and set up the first round of paperwork while Sean was away on a business trip. Talk about some major trust!

He was back in town for just enough time to sign some papers and see the house for the first time and work a few days in the office before we were off again!

Anniversary trip — The good and the bad

We have a tradition that one of us plans a secret anniversary trip every other year. 2017 was my year and I took us to Lisbon, Portugal! I don’t usually write too much about our anniversary trips so we don’t do too much blog work while there. But we had a great food tour, saw an amazing sunset, and even took a day trip to Sintra. We also had some not-so-fun times with Sean eating something that really didn’t agree with him in Sintra and was out of commission for an entire day. Then I hurt something in my leg and couldn’t walk without collapsing in agonizing pain.

Luckily, each incident only lasted a day each, but I really feel that we need to go back and have a bit of a do-over involving lots of food. : )

April was pretty cool. Lots of pre-move house shopping. We started figuring out what we wanted and even ordering some things to be delivered in our first week at the house. What a crazy time!

Then we jetted off to the U.K. to go to Cardiff in Wales. Why? BECAUSE DOCTOR WHO!  We are not-so-secret Whovians and the Doctor Who Experience closed this past summer and we had to experience it before it went away for good. It was the perfect time to go because we even got a tour of the filming set. Fan-girl Jessica was in full force! I made a HUGE post with a ton of photos about the Doctor Who Experience and even a video of the Experience, but mostly the set tour!

Right after our visit to Cardiff, we were back in London for the Traverse conference. I really appreciate these conferences because I learn so much, I get to network, and best of all, get to see my other blogger friends! There are a lot of us–I don’t think that is a surprise. But we aren’t often in the same place at the same time. The great thing is that it doesn’t change how friendship works! Online chatting is necessary, Skyping every once in a while is a plus, and drinks, when we are finally together, are the best.

Back in Amsterdam, we picked up our house keys the next day. It was just the craziest spring!

That summer was nice, though. I had my birthday, my first press trip with Amsterdam Marketing, my first paid campaign, and went back to London–just because. I’d almost go as far as saying that summer was pretty chill which was a nice change of pace.

Then fall came and everything went crazy. We had a big change for us, plus we were traveling a lot. I’ll never complain about having the ability to travel, but it was just tiring while also being amazing.

Ireland was everything I could have imagined and more. Such a beautiful place with wonderfully nice people. TBEX (another blogger conference) was hosted in Killarney, Ireland. Not long after we arrived, we were already trying to figure out how to get back! I’m terrified of renting a car where they drive on the other side of the road, but that area might just have me risking it. OR getting a proper tour. That would work too.

Again, it was amazing to see friends. I love them all, but to see Agness again was definitely a highlight. She runs etramping.com with her best Cez and she used to live in Amsterdam. She has to be one of the sweetest people I know and I was over-the-moon when I got to see her again and FINALLY meet Cez. Really? It took 3 years to finally meet? : )

The Ups and Downs of our Italy trip

Straight from chilly and somewhat rainy Ireland, we flew right into the beautiful sunshine of Northern Italy. A close friend was getting married the next weekend, but that meant we had a full week in Italy and no real plans. We ended up just hanging out in Como (the town at the foot of Lake Como) for 5 days. It was the most relaxed I had been in a very long time.

Since we hadn’t really planned our length of stay, we had to move apartments…which was the best thing ever. The one we moved into for the end of our stay was perfect in so many ways. It was huge, had a massive bathroom with a washing machine. Great kitchen, with a big living room with tons of light overlooking the small streets below. Just below us were great shops like a wine bar, pastry shop, and gelateria. I wanted to keep that apartment for ourselves. Forever.

We had to leave Como eventually and get to the Piedmonte region for the wedding. This ended up being quite the adventure. We took a train to the airport where we had a car waiting for us to rent. Problem was that our credit cards were being declined because we were sent new ones and hadn’t received them yet and I changed our address so they accidentally canceled our cards. Embarrassingly I got an email from the woman running that amazing apartment in Como saying my card was rejected and if I had a different one. So, I got mine fixed right away and it worked.

When we were standing at the car rental counter, I had to call the card company again and they kept saying it was fixed. But it wasn’t. After calling twice and it not working, we were going to use my card…except that I don’t carry around my American Driver’s License so I wasn’t legally allowed to rent the car. Seriously.

So, there we were, standing at the airport with luggage and no car thinking we’d just grab a flight. When, in a group text, I saw one of my other friends who were there for the wedding just got their rental car. She and her husband were kind enough to give us a ride for an hour and a half to our apartment. That’s 4 of us, plus all our luggage in a tiny European car. Phew! Basically, we bummed rides for a few days, but it was worth it to be there for that wedding. Friendship and celebrations are important!

Back to London, then directly to Iceland

My passport has stamps from London and Amsterdam almost exclusively, it’s kind of weird. But there are so many reasons to go to the capital of England. This time, in November, I was there for the World Travel Market. I had some great meetings lined up, had my focus, and was very happy with all I got done. Not to mention, hanging out with my friends is always fun.

It was a pretty normal trip until I flew to Iceland. Waking up on that Thursday, my throat felt a bit weird. But considering how much talking I had done in the last 3 days, it wasn’t too surprising. The next few days were full of exploring and being outside on glaciers and stuff. I couldn’t be held down! There were even 2 days of conferences after all of that with Trablin. I loved being there, having those experiences, learning a ton, and meeting some nice people.  Sadly, I was just plain sick the whole time. Having just boarded the plane at 8 am Amsterdam time, I made an appointment to go to the doctor. And I’ve been on-and-off sick since then.

Funny thing about blogging, Tweeting, Insta-story-ing while traveling sick is that you get back and people are like “What do you mean you’ve been sick? You didn’t look sick in your stories/that picture/etc,” It’s easy and yet tiring to do quick pictures and 10-second videos and get on with the day, then go to bed at 8 pm and sleep for 12 hours. It’s just so exhausting!

Oh, December. We have such a love-/hate relationship. It gets me ready for the new year–ready for renewal and inspiration. Ready for motivation. But also, I’m usually sick.

We got to go to a Christmas market in Frankfurt. I was so excited that I would actually make it to Germany for a market this year! I was also sick the whole friggin’ time. At least I made a short video of it because I know how much people love to see the markets in all their festive dressings. Who am I to disappoint?

Finally, it was our first Christmas in our new house! We didn’t do too much decorating because we just didn’t have a lot of time. But my grandmother made and sent Christmas stockings which were perfect! On Christmas day, I made a blueberry croissant breakfast dish, then we watched Christmas movies all day. So relaxing!

A look back and a glimpse ahead

2017 was a complex year. With so much going on personally and trying to find my place in the blogging world while working a “regular” job, it was overwhelming. I’m not really sure how I much I enjoyed versus how much I felt I just need to get through. With this year behind me, I’m happy to look forward and find better ways to take care of myself and do what I need to do to be the best me I can be.

It’s time to take charge of my life.

To flourish is various aspects of my life.

I’m excited because I have surrounded myself with people who believe in me. That means absolutely everything. 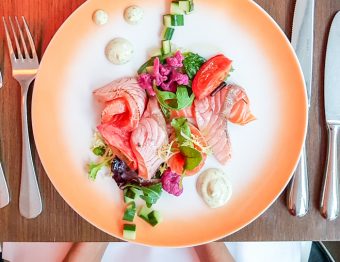