For Whovians everywhere, it’s a sad, sad time. The Doctor Who Experience in Cardiff has closed after a 5-year run. Honestly, it could never run long enough for us–like the show itself.

In case you didn’t make it to Cardiff and experience the DW Experience, I’m going to walk you through it and hopefully you can get a sense of what being as close as a Companion is like. But first, here’s a vlog about my adventure.

The Doctor Who Experience was right on Cardiff Bay, Wales in a huge building. Walking in, the space seems a bit small, but that will change. If you felt a bit peckish, there was a cafe available. You didn’t know what adventures were ahead of you, so it was a good idea to grab a bite! The staff is very nice and super aware of how, um, passionate, us Whovians can be and were super friendly and helpful. 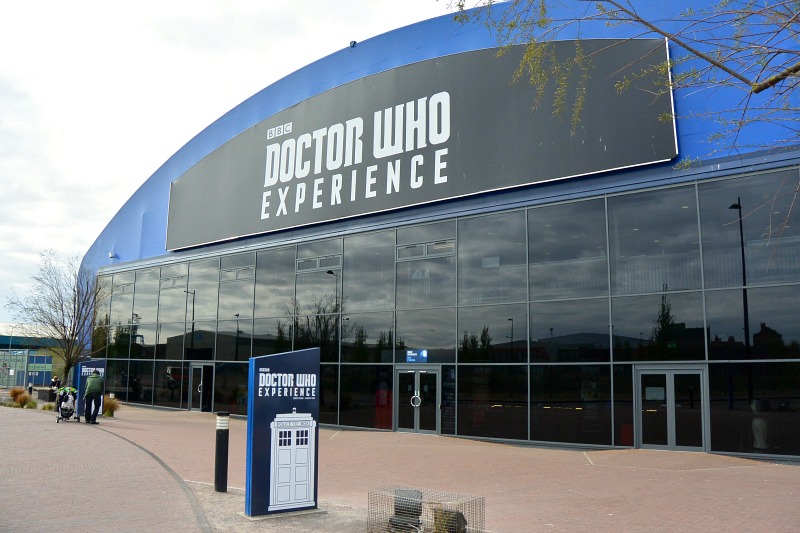 Once it was our time we went into a little room with a set number of people and got introduced to the concept and it was then that we realized that everyone is in character at this point. With the special access and a crystal around our neck, we entered a larger room with artifacts while the guide was explaining things that we didn’t pay attention to because we were just anticipating something unexpected to happen… 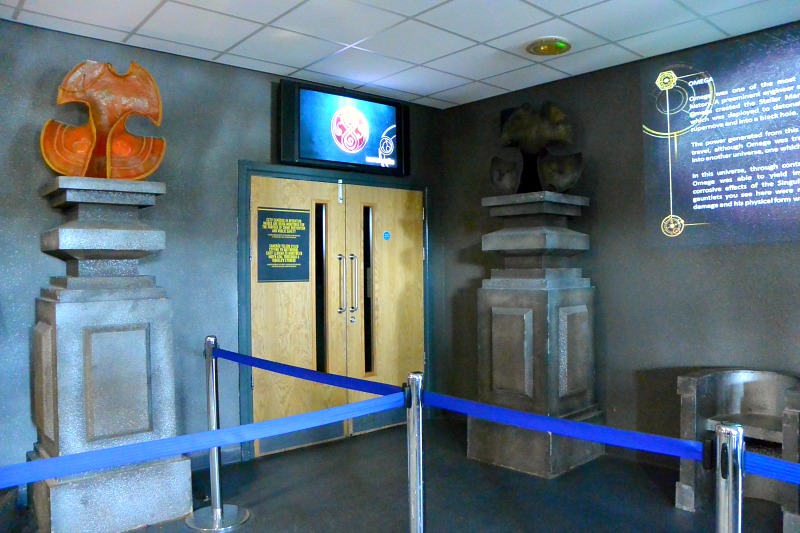 An alarm goes off because there’s trouble! Next thing we knew, we were video conferencing with THE DOCTOR.

All the sudden, there we were, in our own Doctor Who episode. The wall with the crack–yes, that crack–opens and we rushed into the TARDIS (RUSH! It’s an emergency!). The 12th Doctor and his helper (the guide) gave instructions on how to land safely.

But where did you land? Skaro?! Oh crap. Try not to wake up the Daleks as you pass them and search for a time crystal. Aaaaaaand of course the crystal is in a Dalek. One of the brave souls in the group has to go get it.

I’ll give you one guess on what happens next. What does every Doctor Who episode have in common? You must RUN!!!! Don’t lose focus because we run into… 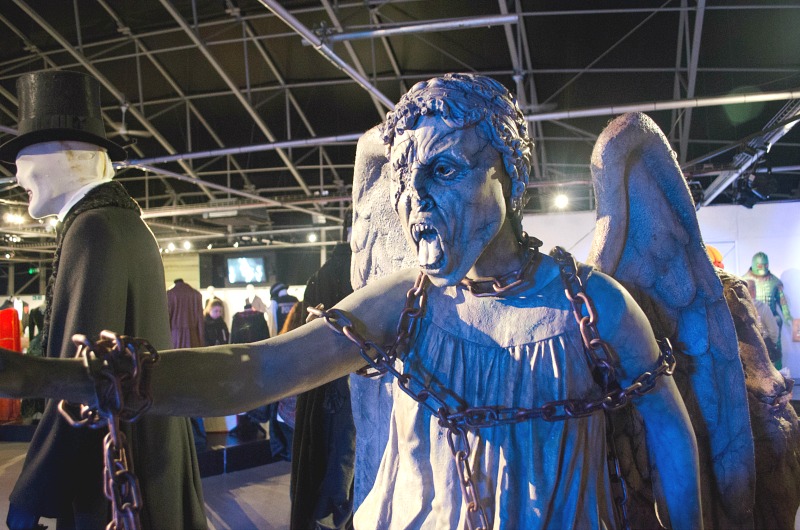 Seriously? Do they give anyone else nightmares? Sean loved this part because they are his favorite villain. I just wanted to get away from them!

We all find another one of these crystals and move along to the next room while being sure someone is always looking at all the angels.

Our final stop was in a junkyard where someone found the last crystal that was needed to defeat all of the villains. One lucky member of the group gets to put all the crystals in the receptacle and defeat all the evil! With our 3D glasses, we got to see them get sucked through all time and space and a roar of applause erupts. Well done, us humans. 🙂 The thank you from the Doctor was all I needed. I was happy to do my part in saving the universe.

The entire experience kept me on my toes and if it weren’t for us being an entire group, I could have actually felt like I was running around with the Doctor! What I would have given to be a companion on that show… 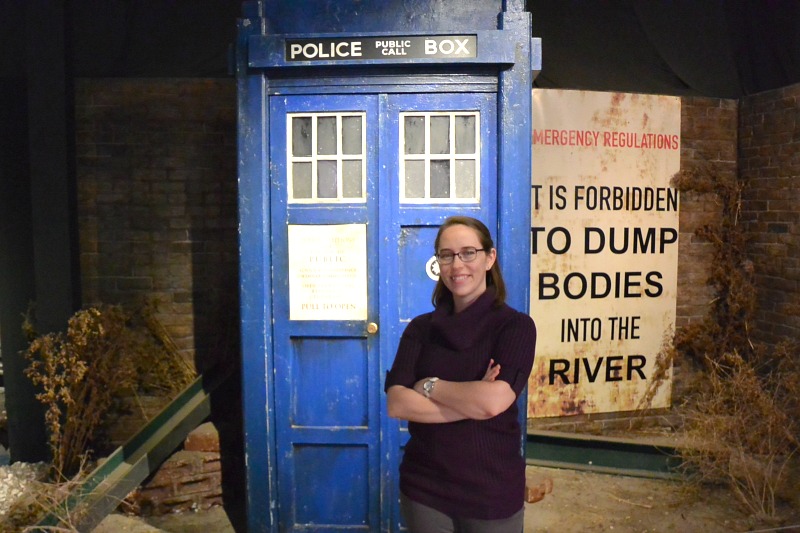 Next up is the museum, where we were both inside, and surrounded by, Doctor Who history. Old TARDIS sets were scattered throughout to inspect the finer details you just can’t see on a T.V. screen. Circling around the consoles that I used to watch for hours on the show was surreal. I tried so hard to imagine myself with David Tennant while in his version of the TARDIS. Traveling across galaxies and through time…so exotic. So fanciful. Exciting. Dangerous. Life-changing. 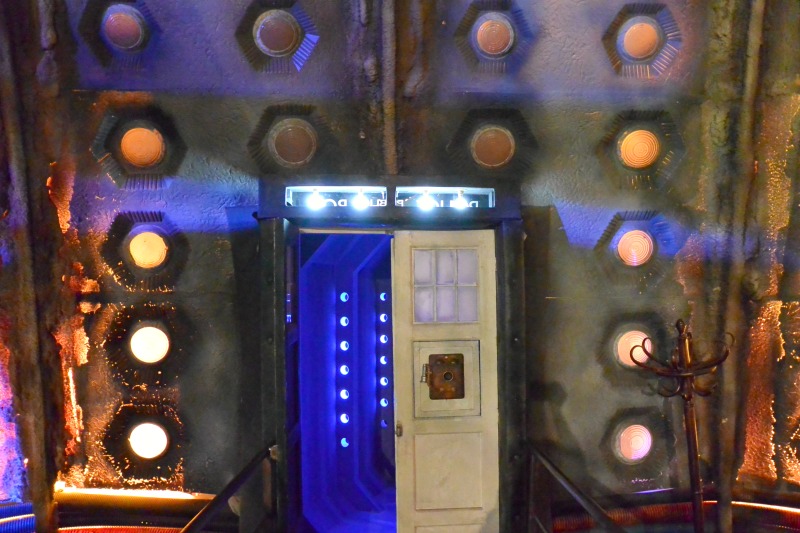 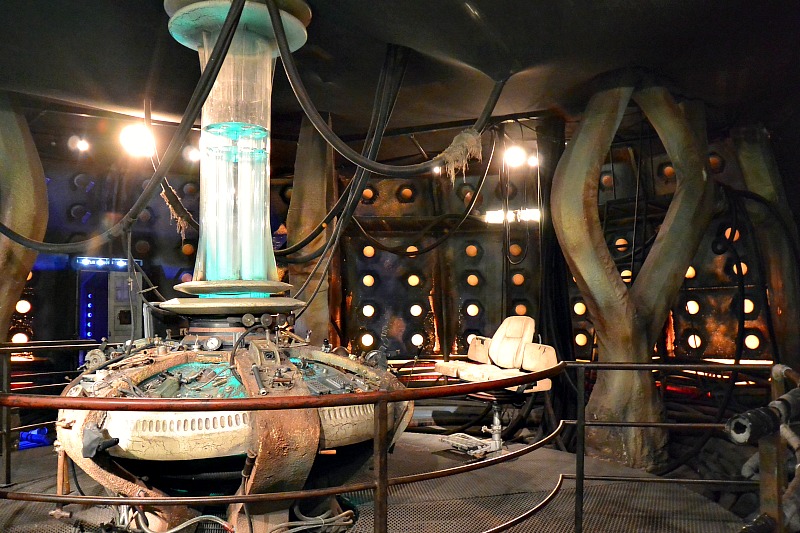 As I gathered my jaw from the floor and woke myself up from fantasyland, I moved along to other costumes and characters. It’s so striking how in one glance, I knew exactly who wore which outfit. The characters on Doctor Who are so developed and that even shines through in what they wear. It’s fascinating and really makes me question my clothing choices… 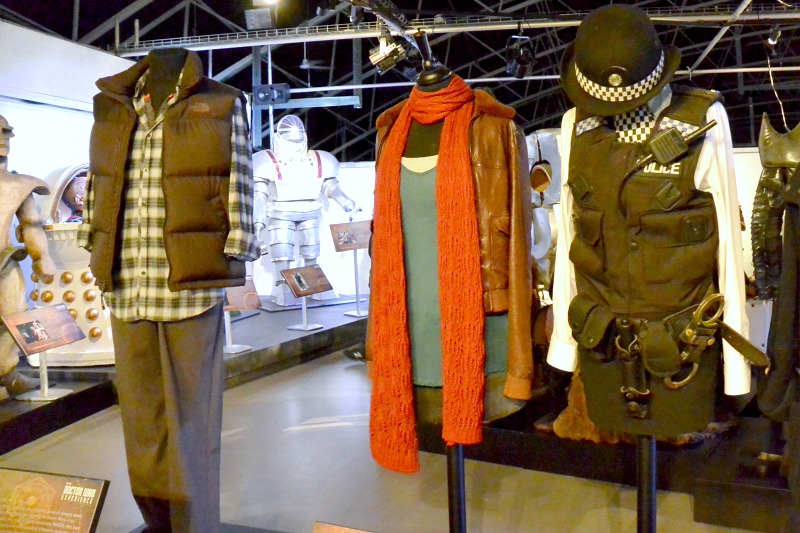 From friends to foes, they are all here standing at attention waiting for you to snap your photo. You don’t even need to mark yourself when the Silence shows up…the proof is in the picture you take! …what creepy looking creatures. 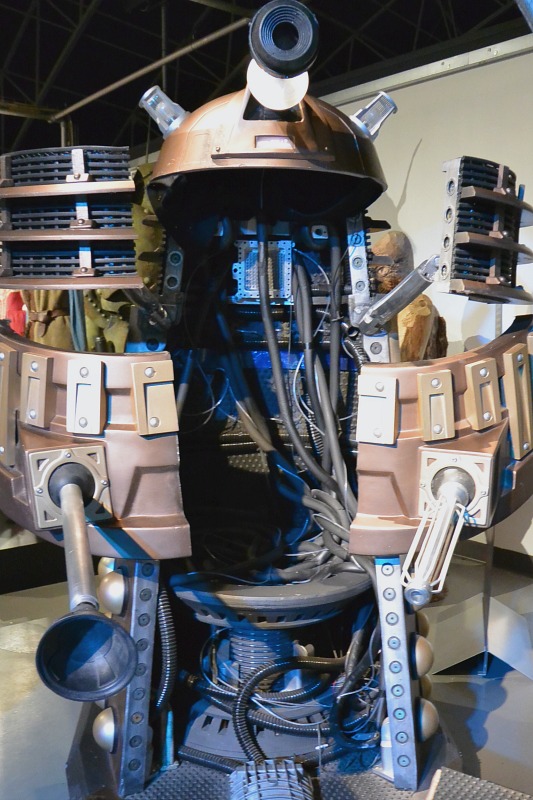 It was a great collection and so enjoyable to walk through. A little secret we learned was that the BBC Wales studio also (kind of) used it for storage. If they needed an extra Dalek in a scene…they could just ask the Doctor Who Experience! What a great relationship to have.

Through the gift shop

You guessed it! Our credit card was ready to visit the gift shop! It was overwhelming. I didn’t want everything, but I did want a lot. All the shirts, bags, art pieces, books, mugs, mini-TARDIS. I SO WANTED THE MINI-TARDIS. 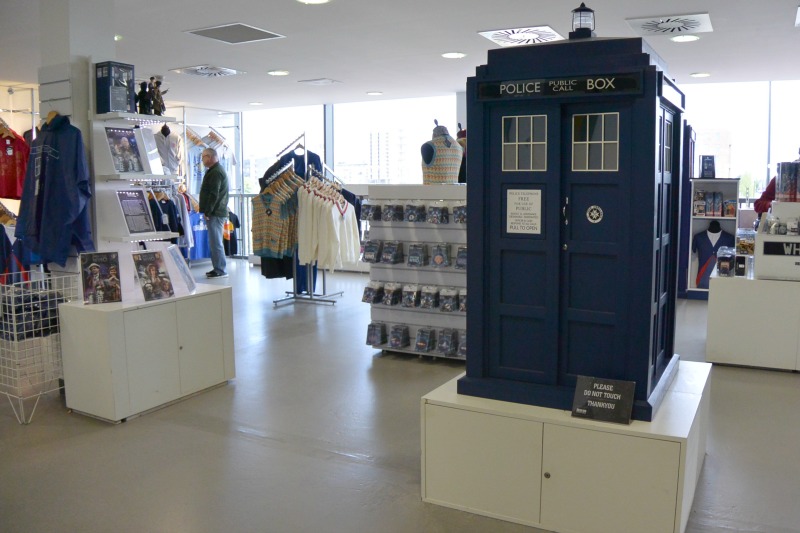 They had pretty much anything you could want. Housewares were covered. Behind-the-scenes books. Autographed memorabilia. Clothing, including some cosplay. It was definitely a kid-in-a-candy-store situation. 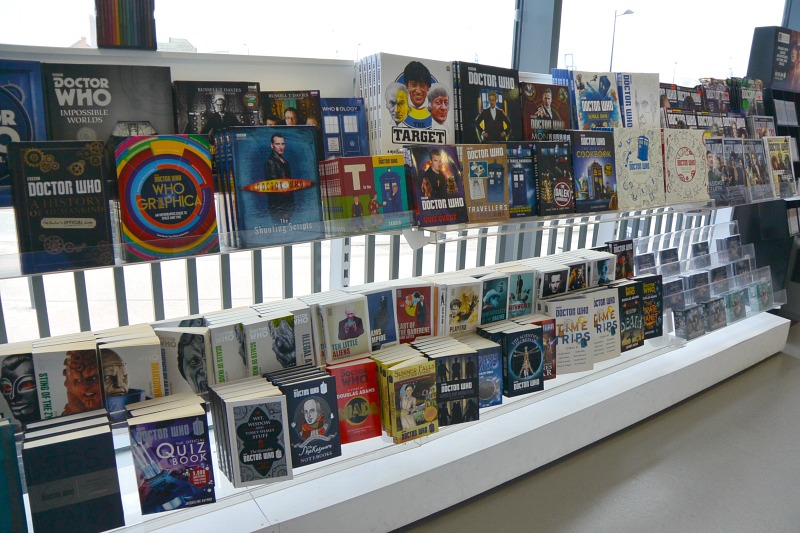 In the end, I got a Tote-bag and a t-shirt to remember the day. I held back. It took everything I had not to go all swipey-swipey with the credit card. 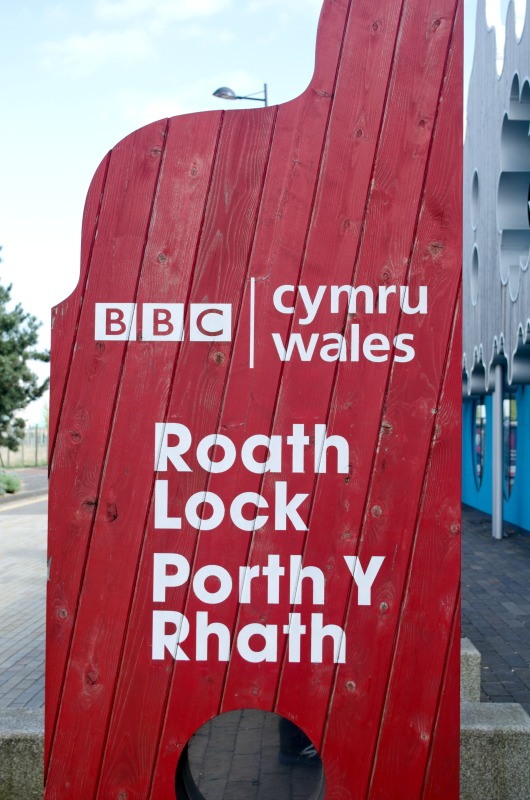 OH MY GOD! When we first got the email to say that we could add this onto our tour, there wasn’t a moment of hesitation. We had to go! There are some things in life that are legitimately once-in-a-lifetime, and this was one of them.

Where was I? Doctor Who set. Right. 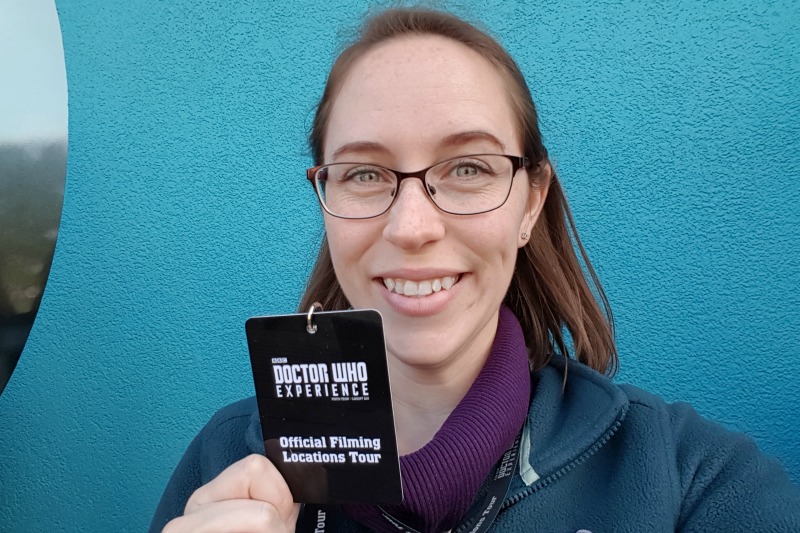 Special badges, bag check, and a turn-style were all that separated us from the real TARDIS set. Once we were in the massive studio (a big rectangular room that you can do literally anything with to create television or films), our guide, Lauren, let us run around and snap-snap-snap all the photos we could possibly take. We were split into groups of two since the TARDIS set is not big enough for so many people and the first group went inside. 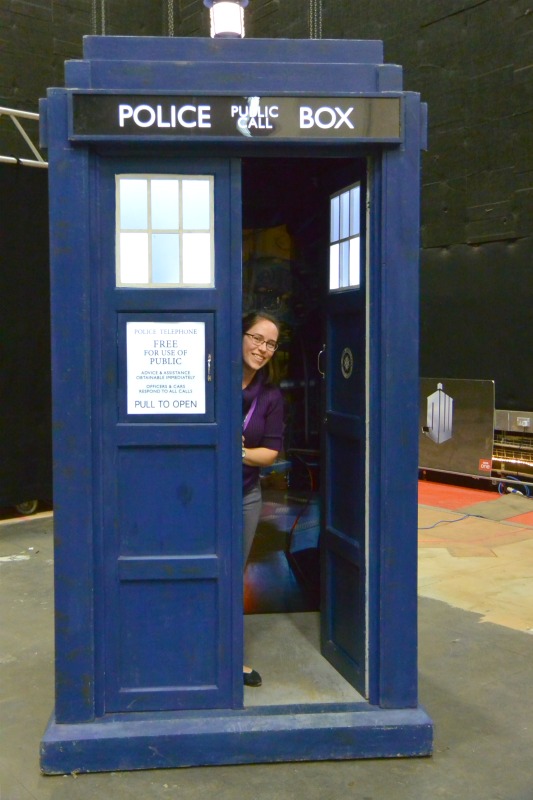 That was totally fine because I got a lot of quality time with a disassembled Dalek and one of the TARDIS police boxes. There was something so strange about standing in the TARDIS police box looking at the massive TARDIS set that they film all the interior shots. BBC Wales has 4 studios and Doctor Who used the biggest one. *Shocking!* Not so much…have you seen the show? 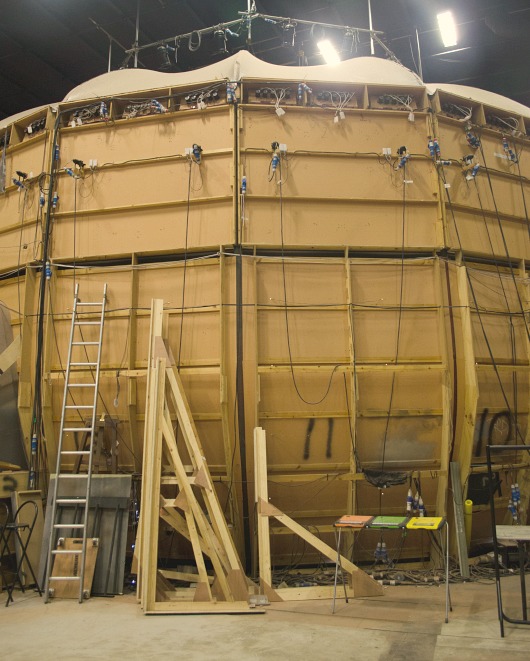 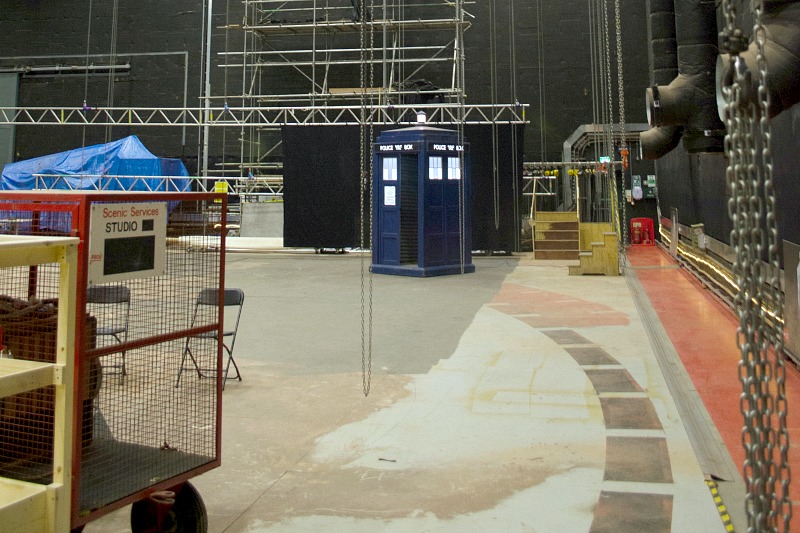 You see that police box above? That can get moved around pretty easily. It’s packable. That sounds insane, but it “flat packs”. The space it’s in can be used to build other sets for the show as needed. It’s so surprising how little space you need to make a big on-screen impact. Staff on Doctor Who do an amazing job transporting us to far off times and places with very little.

I was so excited for this that I had so much anticipation energy built up that I wanted to burst through the doors. But someone else beat me to it. Didn’t matter much because once inside I was in awe. 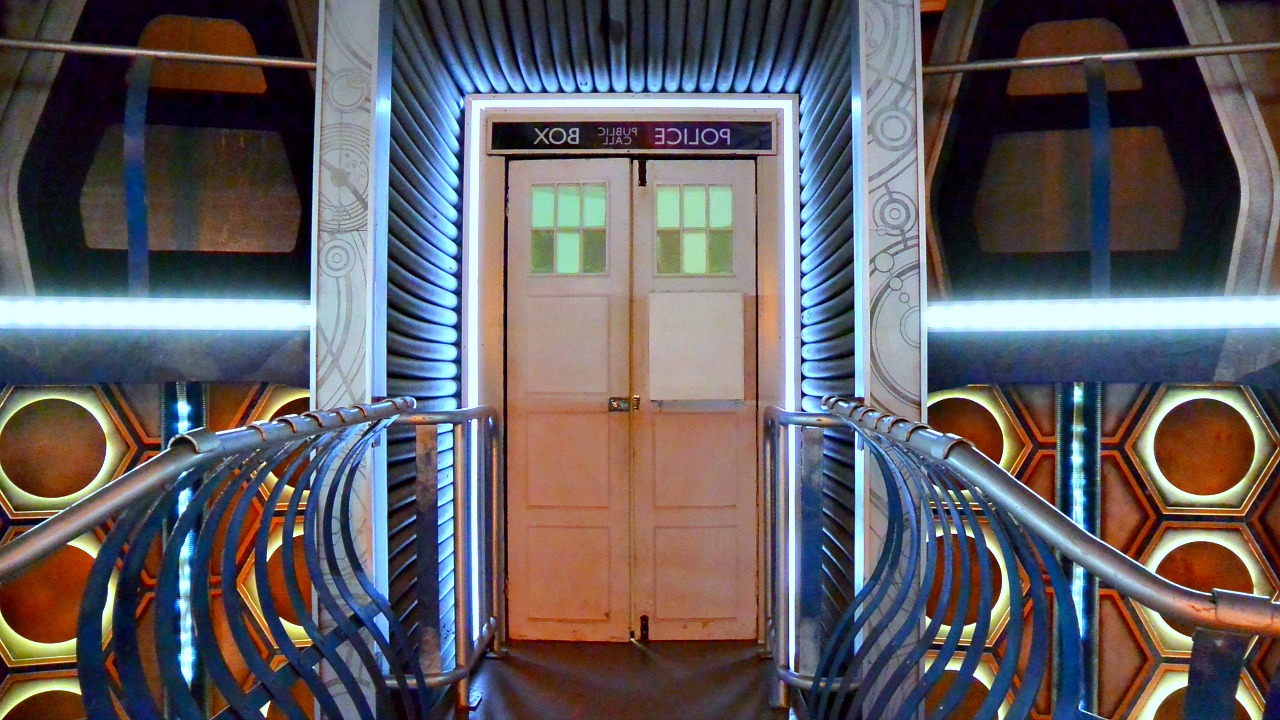 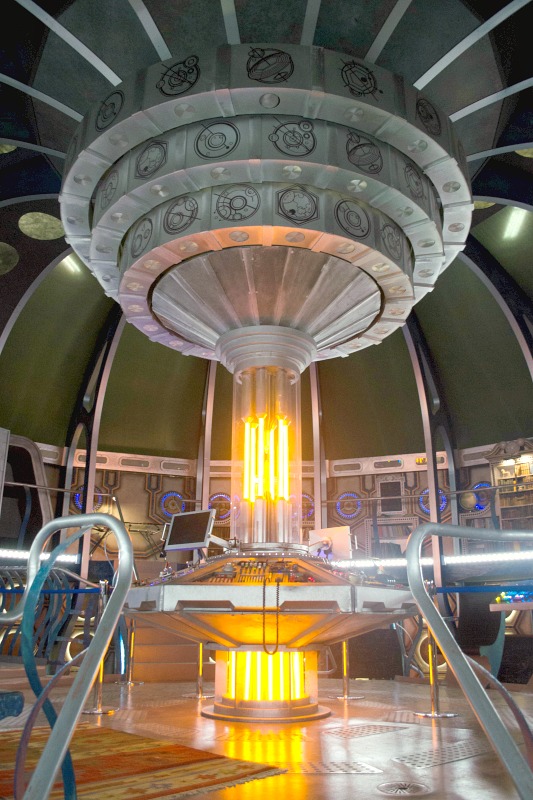 I like to think that I don’t get too star-struck, but being in that structure where Peter Capaldi and his companions have been filming was just incredible. Balancing photos and just being there was a struggle since we only had about 10 minutes. We weren’t allowed to touch the set since there could be some continuity issues if they needed to film that exact set-up again.  Though I found that to be highly unlikely since they had finished filming the season and only had the Christmas special to go, I was a good girl and obeyed.

If you’re squealing inside like I was, here are some great TARDIS set shots: 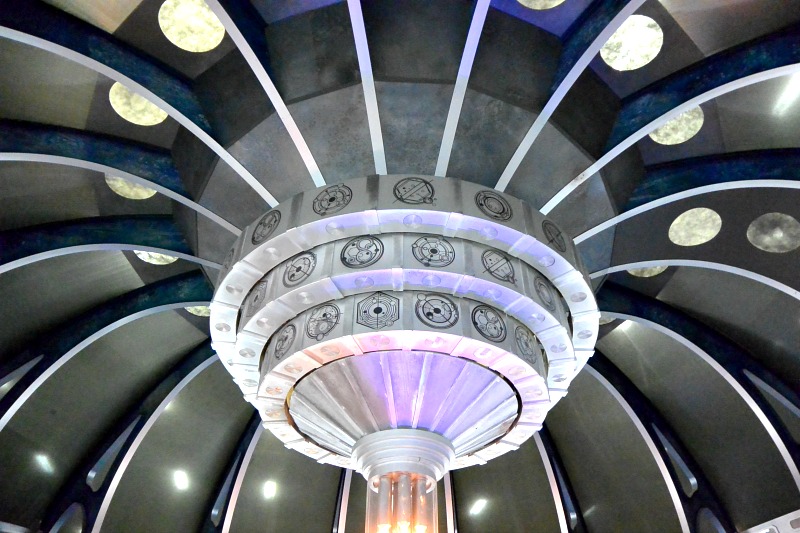 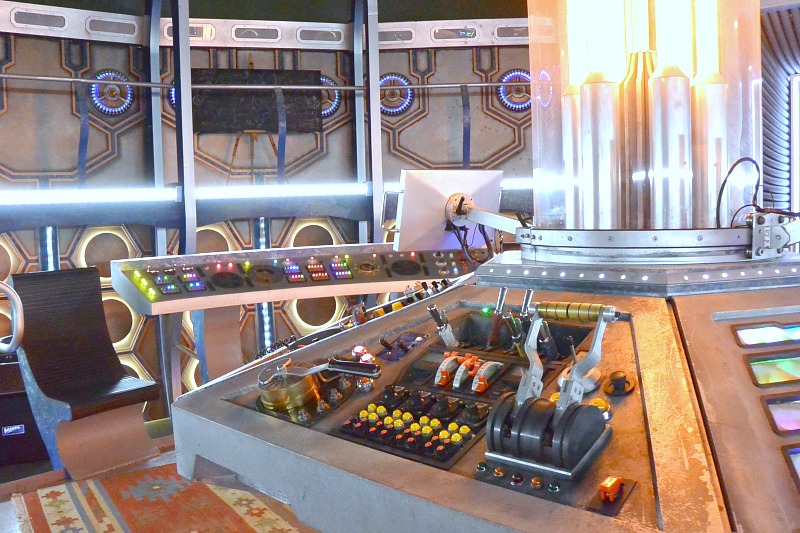 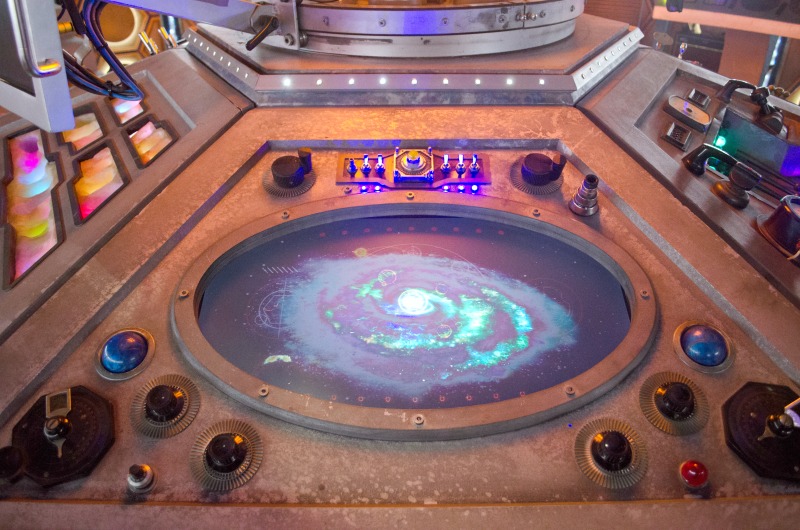 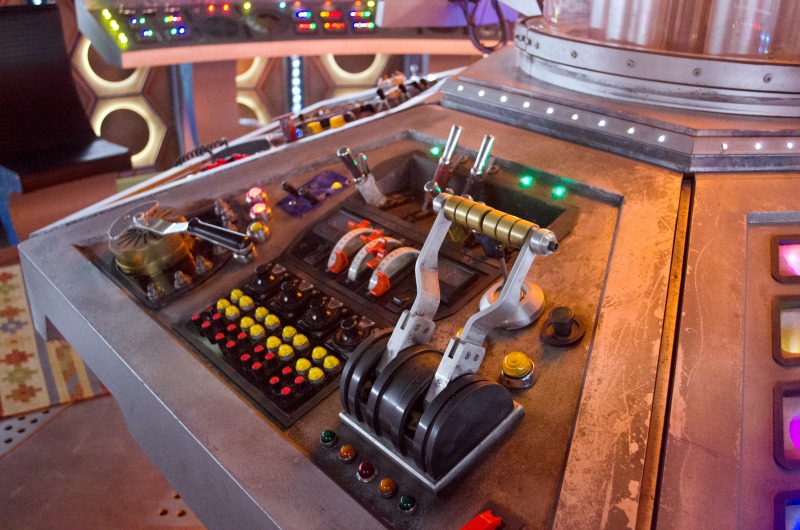 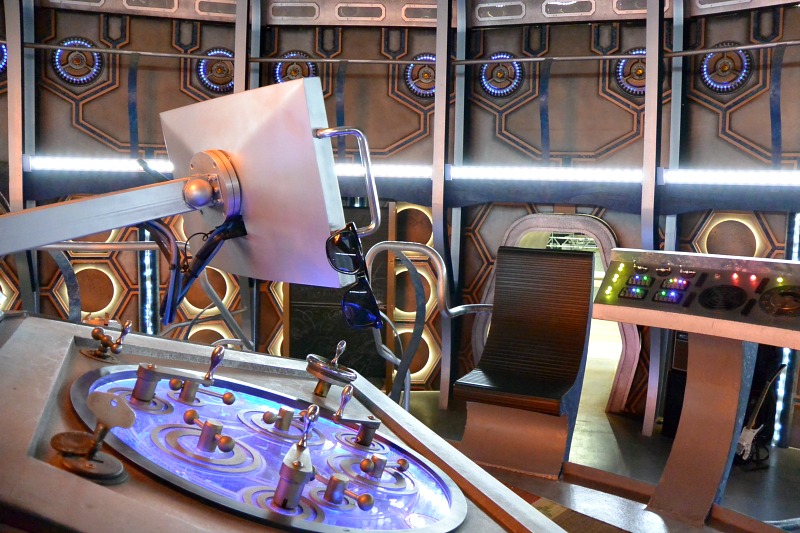 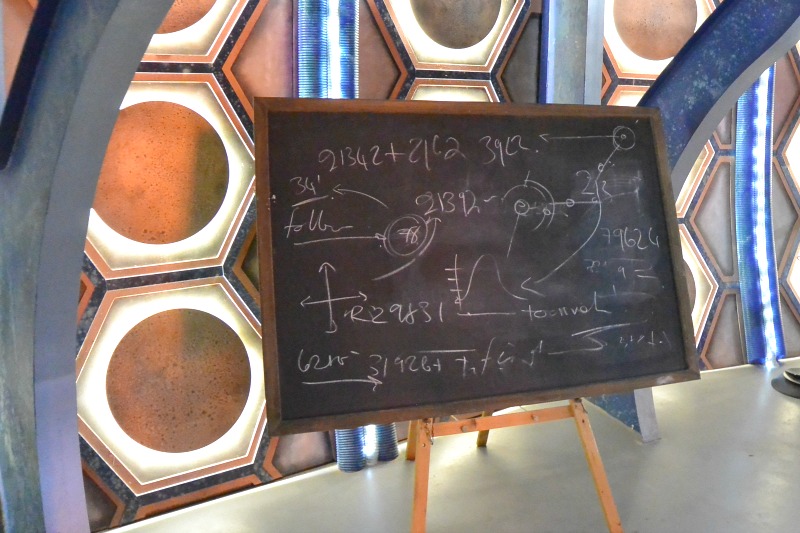 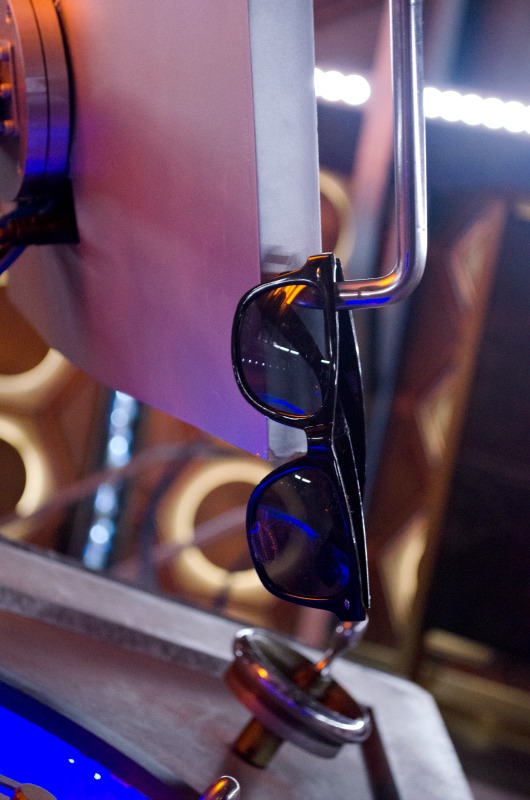 My smile was just painted on my face that this point. I wasn’t ready to leave! But eventually, I did have to go down the stairs into the belly of the TARDIS and exit through a door down there. At least there were a few more surprises to look at. 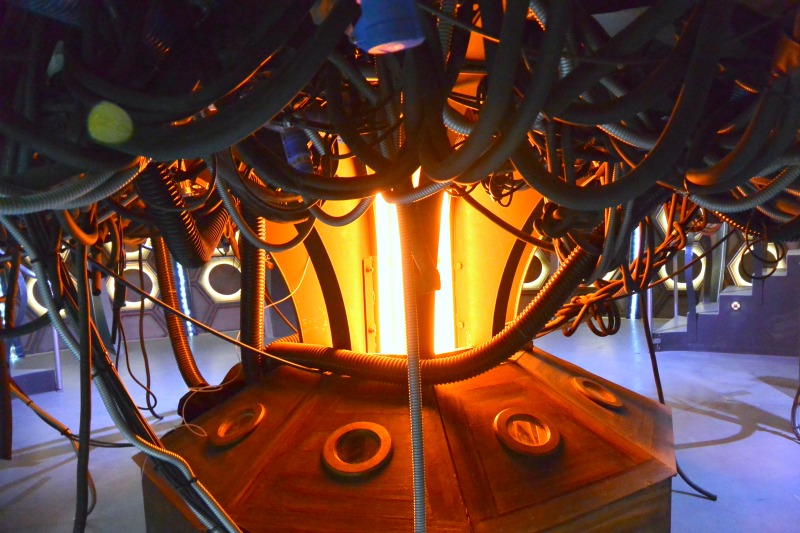 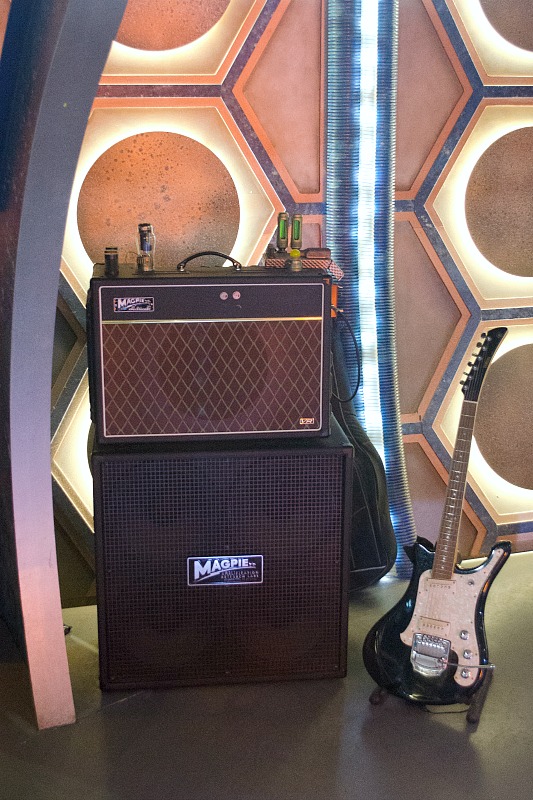 While it is a full 360-degree set, there are multiple points they can remove temporarily for crane shots. But usually, it’s just a person with a camera in the set with the actors. Of course, it takes more than one camera-person and the actors to make a show! Some of the rest of the crew might be hiding below or right outside the doors until needed.

I’m such a nerd for television and movie filming. I love the behind the scenes stuff–nothing is ever what it seems! When I learn little tidbits and see it all for myself, I feel like I’m in on the secret. If you ever get the chance to visit ANY set, I highly recommend it!

As for the Doctor Who set, I have no idea if it will be open for tours again now that the Doctor Who Experience is closed. All the Whovians are still hoping it will survive somehow. Maybe somewhere else or if a different form (like the Doctor 😉 ). Fingers crossed! 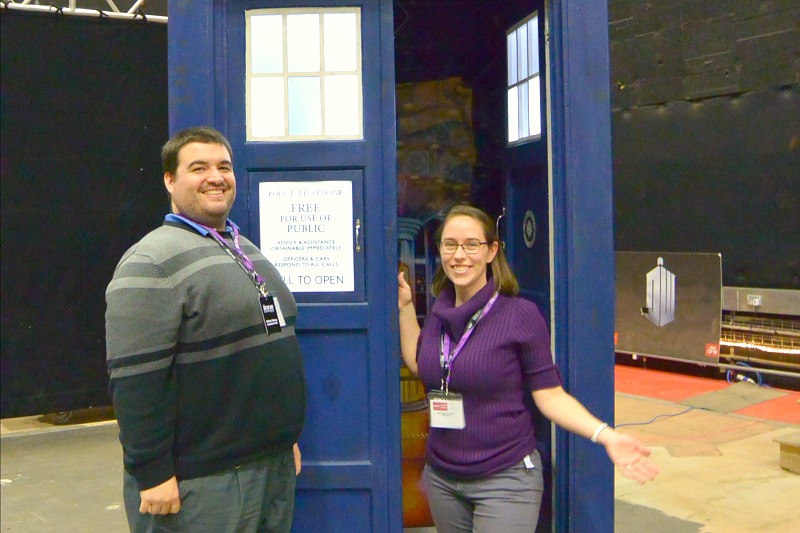 What a crazy awesome day! What’s the most amazing or memorable experience you’ve had while traveling?

To finish off this post, here’s the finale video the BBC put together!

4 thoughts on “Doctor Who Experience”