Sinterklaas!!! Pieter!!! The chanting of the children was infectious. Sinterklaas is a Dutch character that looks a little like Father Christmas, but is really its own character with its own story. For the parade, he arrives in Amsterdam by boat (how else would you arrive in a city with more canals than Venice?!) from Spain. He comes up the Amstel river and docks at the National Maritime Museum for a presentation with the mayor, after that he rides his white horse through the city while stopping at Dam Square and Leidseplein for some other events. It’s really a huge deal for the whole city! See how festive it was through our video of the parade.

He is joined by Zwarte Piet (Black Pete) in the stories, but in the parade there are many Black Petes! They roll by on roller blades and some even hand out these small little cookies called Kruidnoten that are similar to gingerbread.

As part of the parade, you’ll see some rather elaborate floats, fire trucks, a couple of marching bands, and trucks filled with the cookies! In the U.S., these types of parades end with Santa, but not in this one! Sinterklaas was about ¾ of the way back, but there was plenty to see once he passed through.

This parade is fairly short and not quite as varied as we are used to for holiday parades, but it was filled with so much spirit! The children were mostly dressed as Zwarte Piet, but some were dressed as Sinterklaas. That was probably the cutest thing I saw all day.

We are thoroughly enjoying learning the holiday customs in Amsterdam. We were even lucky enough to have a born-and-raised local next to us to answer all of our questions. It was rainy, so the turnout was smaller than usual, but this was such a fun event and next year we’ll make it to one of the squares to see the festivities they have set up there!

Amsterdam City Pass: A 3-day itinerary with the I amsterdam Card
March 10, 2020 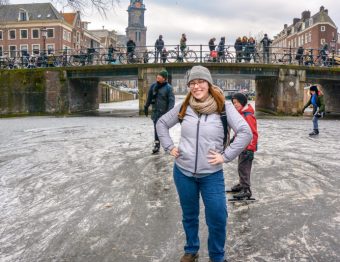 What to wear in Amsterdam (for all seasons and from a local)
March 3, 2020

How to use public transportation in Amsterdam
February 4, 2020

Things to do in March in Amsterdam
February 1, 2020