No matter the season, being on the Amsterdam canals is the best thing to do in the city–hands down. Go ahead…try to argue something else 😉 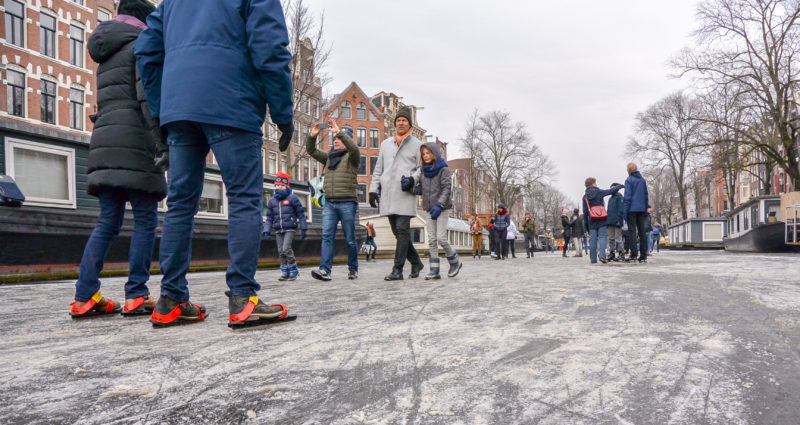 When winter comes around, the locals go into a bit of hibernation and the weather typically makes it unpleasant to be on the water unless you’re in a covered and heated boat. The main exception here is the Amsterdam Light Festival, but it’s totally worth it to be cruising the canals in the dead of winter, at night, to be part of that.

A visitor or a local would be able to enjoy winter in Amsterdam if you’re just willing to leave the house. Who can be us? It’s COLD! To be enticed to leave it has to be something pretty special. For this beautiful city, if it’s snowing, or the canals freeze over, you can bet people are going to go out to see it!

Snow is pretty unusual here and if it sticks, it only stays long enough for a few photos and then it’s gone. Public transportation doesn’t handle snow very well, so it’s probably for the best.

Is it cold enough for the Amsterdam canals to freeze?

Amsterdammers were watching the weather for an entire week people and speculated about whether the canals would freeze. For the magic to happen, it has to be below freezing for multiple days and the water has to stay pretty still.

The city’s water agency did its best to help out Mother Nature by banning boats from going down certain parts of the canals. Then they would give the official go-ahead when it’s all safe for skating. Everybody wanting this to happen–and they knew it!

Is it safe to skate on the canals?

I didn’t really know what to think about going out on the ice. It sounds cool and something that may never happen again. Seriously, you never know!

I’m a ridiculously practical person so I had many questions. Mainly, is it safe? Nobody likes the thought of falling through ice and into the freezing water. Let’s be real, here. It’s kind of a turn-off.

Once I stopped being such a chicken about it, I headed out to see what all the fuss was about. People were putting their kids on it–so it must be safe! At least that’s what I told myself. 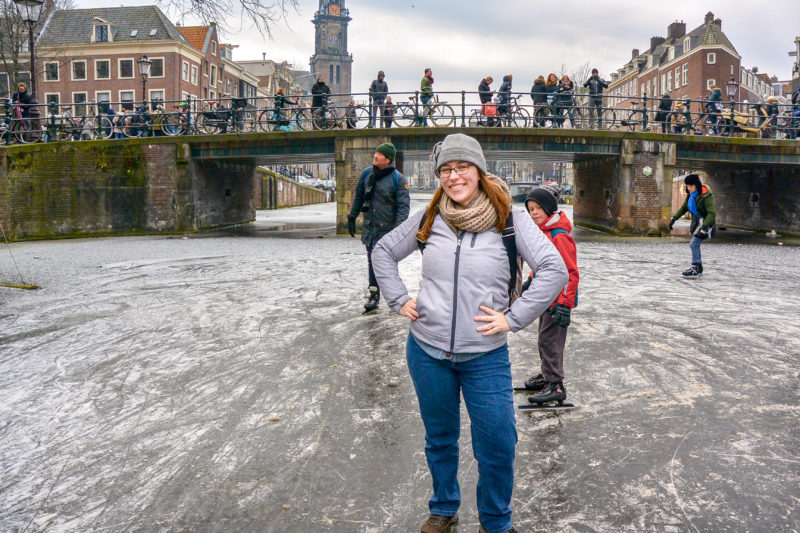 The first canal I passed over was the Brouwersgracht. It was nicely frozen over and basically the perfect picture of a frozen Amsterdam. That canal, it’s houseboats, and canal houses are basically what people think of when they have a picture of Amsterdam in their heads. Add one family hopping of their houseboat and onto the ice with the skates, and it’s basically a movie. 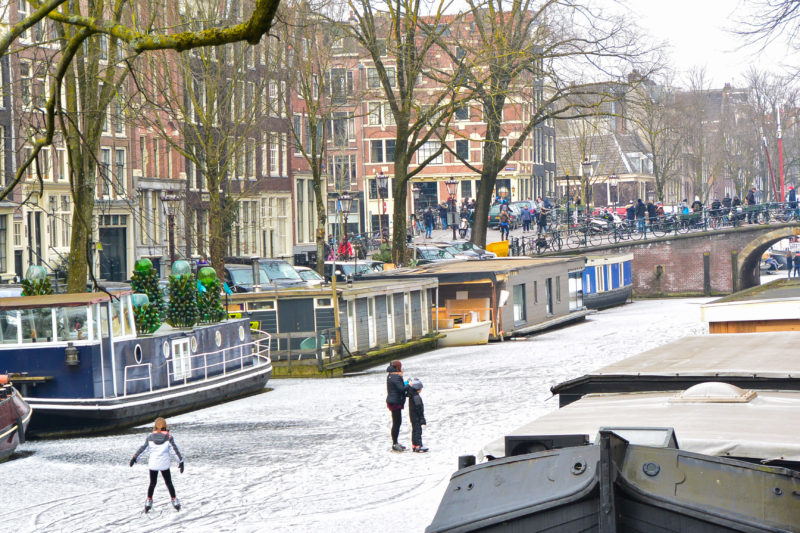 Ice skating on the Amsterdam canals

Yes, the Dutch are known for ice skating, but no, they don’t usually practice on the canals. This hasn’t happened in 6 years (in Amsterdam) and it’s hard to tell if/when it will happen again.

But seeing everyone out and about in their hockey or racing skates was incredible. It honestly felt unreal. In some spots, there were a lot of people. Some kids were getting their first taste of skating this way, some were just flying by, and other people like me didn’t have skates and just walked around taking it all in.

Going under bridges were no-go zones for the most part, though I think I saw one that people were going under. However, I also saw a video where that’s precisely where someone fell in.

My experience walking on water

I’ve ice skated before, but only on an ice rink and never on a body of water. Not only was it a gorgeous day, but the joy was felt along the canals.

After running into a friend in the middle of the chaos that was the Prinsengracht, I hurried to get on the ice so she could get a photo from above. Sadly, Sean was home and sick in bed and couldn’t join me 🙁 that’s part of the reason I took a video too!

Trying to get on the ice quickly didn’t give me much of a chance to hesitate. I found a boat (that was most junk) that people were using to get on the ice and just went for it. There was a thin layer of water on top of the ice but still looked solid. Bigger people than me were getting on there, so I felt okay about it.

I could not stop smiling. It was one of those experiences.

After getting my camera back I continued to walk on the canal towards Anne Frank’s house. It was absolutely surreal.

Kids were walking, skating, or sledding by.

A couple who came to visit just for this purpose was learning to skate.

Families were having fun.

Some played a bit of hockey while others worked on figure skating. 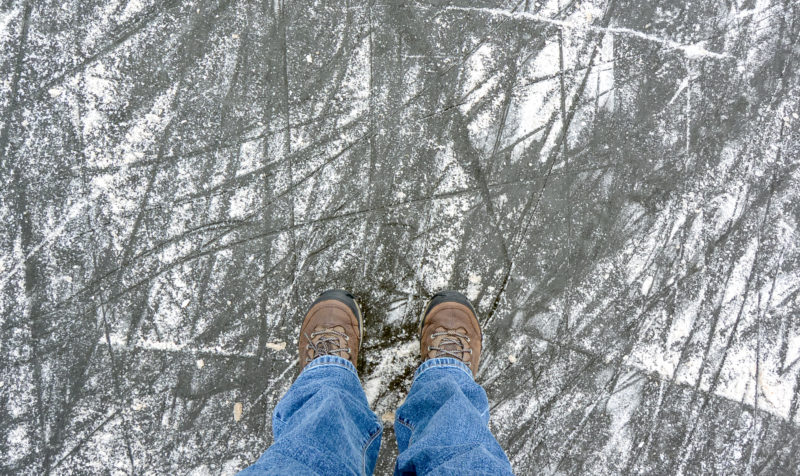 This day was the best showcase of what being an Amsterdammer is all about: community

day on the ice in Amsterdam is one of my best days ever. If you want to see it after you just read all about it, I have a YouTube video posted too.

What has been your best experience ever? Let us know in the comments! 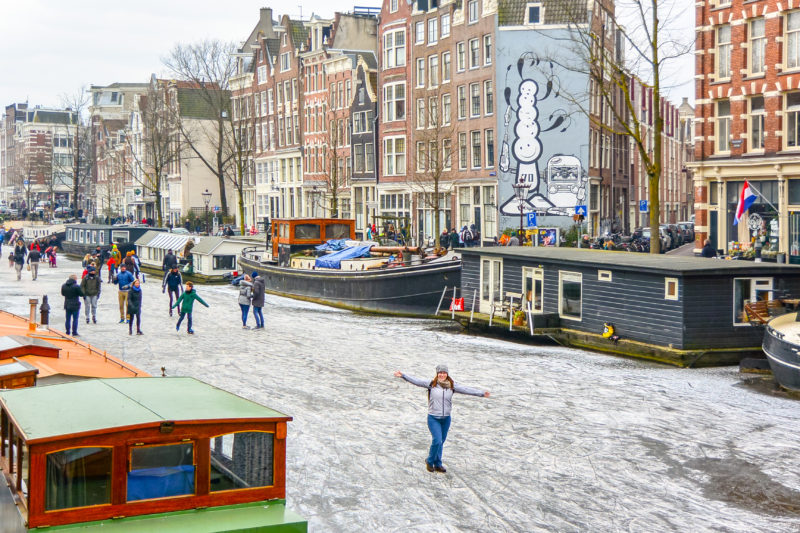