Becoming an expat can be insane, so I wanted to do a little something special since it’s been a stressful few months. And we ended up having such a wonderful Valentine’s Day in Amsterdam without spending a whole lot of money. Actually, I’m shocked at how much we didn’t spend! With a trip to Paris coming up, we figured we would wait to splurge on romantic dinners.

It started with me making a yummy breakfast of bacon, eggs, and pofferjes for us. Yum-my! Later in the day we rode our bikes to the local market to buy new bike lights (romantic, right?). I needed these lights since mine died and we were going out for the evening and it would be dark by the time we got home. But, the market trip wasn’t all about lights and batteries. We had a delicious sandwich from Boer Geert which Sean has not tried before. Aside from being delicious, it was so cheap too! There was also a Leonida’s hiding near by, so of course we just had to pop into for some chocolates. 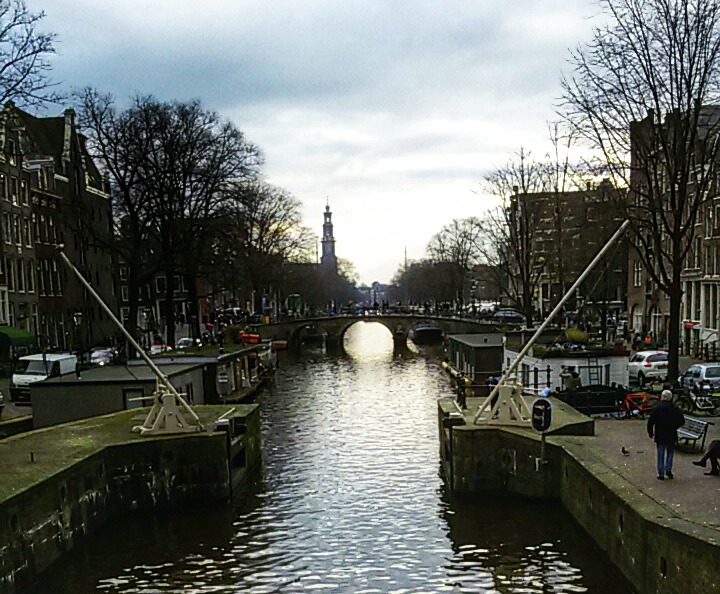 Best Moment of the Day

On the way to Harlemmerstraat we were stopped at a light. It was a few bikes with a women up front with a large purse on her shoulder and a van next to her. The guy in the passenger side of the van pulled out a long-stemmed red rose and had the driver inch up to the woman so he could discreetly put it in her bag. She must have been in her own mind because she didn’t notice until she started biking when the light turned green. She then smiled and looked back at the van. Everyone on bikes watched the whole thing and we were all smiling and laughing as we rode through the intersection. Best part of the day right there. The kindness of people is amazing. That one act made at least 8 people’s day.

We rode down Prinsengracht to Harlemmerstraat and after finding spots for our bikes (it’s not so easy!) we wondered through the sea of people on the beautiful day to find ourselves at Ibericus, a Spanish ham butcher/sandwich shop/restaurant. For an incredible price, we had a large salad, assortment of meat and cheese, delicious bread with olive oil and tomato, and two glasses of wine. We saw another super-cute moment when a boy around 18-months old was being held on his father’s hip while the butcher cut the family some ham. The butcher then held out a piece of ham for the kid but the boy didn’t immediately take it. When he finally grabbed it, he tried to feed it to his father. I can’t tell you how much I wish I could that moment on camera!

Then, instead of going home and giving in to the food coma that we felt coming on, we rode into the center and parked our bikes where we would end up later that evening. We wandered around and made our way to Van Ness Cupcakes to eat some more, then found a place by the Herengracht canal and just sat and watched the world go by.

For the evening, we went to The Library, a wine-tasting store, for their chocolate and wine-tasting pairing event. As members the event is FREE. Woot! You might wonder why I keep mentioning how reasonable, cheap, or free things are. I just want to point out that not everything has to be expensive. We spent less than 50 euros for our wonderful day in Amsterdam and I am proud of that!

What did you do for Valentine’s Day? And if you don’t like that questions, how about, what’s the best money-saving thing/cheapest thing you are most proud of? Let us know below!