Can you think of a better place to celebrate a wedding anniversary than Paris? Now that we live in Amsterdam and most of Europe is very accessible, it was easy to get there and spend 6 days in beautiful Paris! Of course, we travel by train because, um, it is cheap, easy, and relaxing.

We wanted to see the tourist sights (they are must-sees for a reason, right?) but before we left for Paris we decided to focus only on only a few sites on this trip. Originally, I wanted to do and see EVERYTHING: Eiffel Tower, Sacre Coeur, Louvre, Notre Dame, Versailles, Disneyland, Catacombs, and so much more. But we weren’t really traveling to be tourists, we were traveling to get away together for a bit, walk around, and just take in the sights, sounds, and smells of the city.

So, what did we have on our “Must See” list? First off, The Eiffel Tower. How can you go to Paris and not go up the Eiffel Tower? We couldn’t miss it, so we bought tickets online for the first appointment on Sunday morning. The view was amazing but it was quite hazy and we couldn’t see as far as we had hoped. But still, just looking over an entire city made us really appreciate being able to travel and see such places. Standing on such an icon that millions have visited kind of made me feel connected to all those who stood there before me and the many who would stand there after me.

Some other touristy sites that we were interested in seeing were Sacré-Cœur (in Montmartre, near our Airbnb), The Luxembourg Garden, Notre Dame (line moves quickly!), and the Louvre. For Sacré-Cœur we prepared to work those legs! Yes, there is a funicular to get you from the bottom to the top if you need it, but we were up for the challenge. And no, I won’t tell you if we needed to stop for a break half-way up. The church feels so imposing on top of that hill, it almost feels like it is standing guard. There are plenty of spots just sit and look over the city. Be aware of scams/pick-pockets here! Don’t let someone give or make you a friendship bracelet and don’t talk to anyone who says they found a gold ring.

On our way to the Luxembourg Garden, we popped into a grocery store and grabbed some meat, cheese, bread and a few other yummy treats.  The Luxembourg Garden was nice and large, but it really wasn’t a good time of year to visit the area. There was maintenance and a little bit of construction…but it wasn’t too loud, so it was still a nice spot for lunch. By the fountain and a smaller garden were a bunch of chairs to rest on. Some people were chatting, some were napping, eating, or reading. We sat in two of the white chairs and pulled over a third to place our bounty of food on. Not glamorous, but who cares? We were in Paris! My favorite part was when a well-dressed mom and well-dressed little boy (3 years old maybe?) strolled down the wide walking path and stopped at the fountain. I think he had a little remote-controlled boat or something that he was playing with. He seemed so tickled with the whole experience and was so cute to watch. Oh to be a Parisian kid…

Notre Dame is an unmistakable landmark that is grand and visited by many. It was completed in 1345 and took many generations to build. With such grandeur, history, and religious relevance, it’s not surprising that the line was long. Entry is free, and you can wander around the inside for as long as you’d like. Take in all the alcoves, side chapels, stained glass, and even the miniature Notre Dame in the back. Just remember to stay quiet and be respectful.

We made the trek from Notre Dame over to the Louvre, but we didn’t go in…we’re saving that for another trip. The courtyard to get to the Louvre (you know the one, it has the famous glass pyramid and fountain) was massive and stately. Great place for a picnic lunch and lots of selfies! It’s so hard to imagine a space so large for a courtyard when much of the city is cramped together. Can you even fathom how many apartments would fit in that space? Whoa! 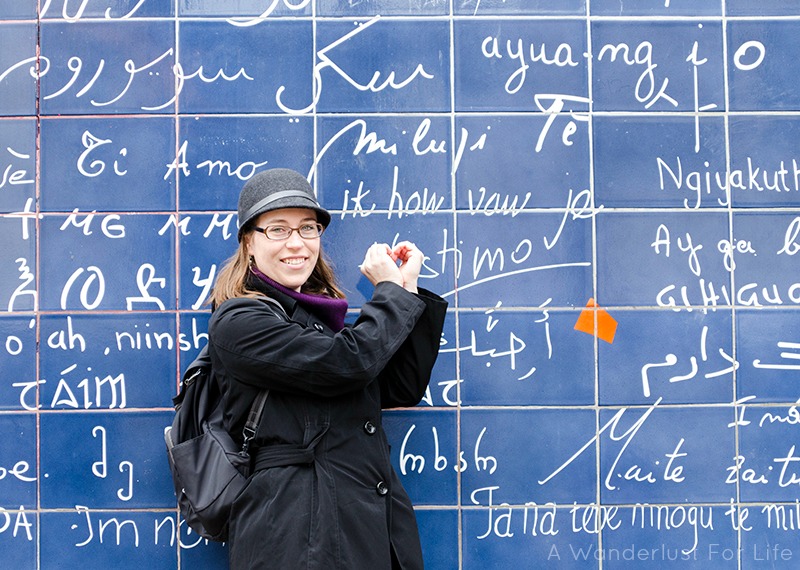 Paris is big, and although we already knew that, it really hit us as we walked along the Seine from the Notre Dame to the Louvre. Cars, bikes, and buses zipped passed us as we strolled by kiosks and street vendors selling Paris souvenirs. Near the bridge that is filled with love locks, there are even people selling locks! You know, it’s just convenient (and smart!). We even saw a photo shoot taking advantage of the beautiful day on the bridge. Looking over the railing you could see Parisians taking in the sun as they lounged on the banks of the Seine. It’s nice to see people slowing down and enjoying life.

We are so grateful to be so close to this amazing city. Europe is a big place, but luckily some great spots are close by. And we are trying to keep up with our monthly goals so we keep exploring! It was a goal, though not a month one, to get a haircut soon…so I got a free one in Paris! Crazy stuff.

Where is your next trip? Have you ever been to Paris and have a favorite place there?

Jessica is an American who decided it was time to live life to the fullest. For her, that meant moving abroad and traveling as much as possible. Her passions are festivals that showcase the local culture, food that is made with love, and wine because it's awesome.
PrevPreviousA Free Haircut in Paris
NextFriday Favorites: Fat Pao in AmsterdamNext