A Free Haircut in Paris

Jessica with Sébastien, Hairstylist at ToniandGuy

Today’s post is going to be a little different. It’s just a story of one awesome experience that I had while on my trip to Paris. I got a tip from a blog, that I can’t seem to find again, that you can get a free haircut at the Toni&Guy Hairdressing Academy. I sent an email asking if I could participate, and ended up having an appointment for Monday–they were only doing it Monday and Tuesday the next week. I was leaving just after 3:00 pm on a train, so the 9:00 am session time was perfect timing for me.

Prepping to get a haircut

It was the earliest I had to get up through the whole trip, but it was well worth it. I’m glad I gave myself about 45 minutes to get there. I get lost so easily it seems, and I ended up needing the extra time when I started going around one of Paris’s many squares looking for the right street. I had no idea what to expect, but went up to the first floor and waited with the other models. Once inside, the woman who seemed to be running the show was running around telling us where to put our things, where to sit, if we wanted a drink, gave me clothes to wear, and then put makeup on us, three girls.

So, there I am in tight, black, and half pleather/half stretchy material pants, and some black shirt with crazy pointy shoulders. Then she put a large gold color necklace and stretchy gold-colored bracelets…three on each arm. And, of course, I was put in shiny black heals that were just a bit too big thanks to my tiny feet. A little later, two men came in who would be doing the haircutting. One starting speaking to me in French and the woman in charge just chuckled and said (in French) that I was American and only spoke English. So, the other guy came over, Sébastien, and said that he spoke English and would have the haircut chat with me. He was so nice! The other man was too, we just didn’t talk much.

As we wait, a Parisian girl started speaking to me in English and asked how I found out about the session and where I was from. She had gone through the process before so she walked me through it. We talked a long time because, like most things, it was a hurry-up-and-wait situation. She invited me to lunch with her when we were done and of course I accepted! I couldn’t wait to talk some more. But we were put in groups of two and she and I weren’t together. So, she finished before I did. We said we’d meet at 1:00 pm which was when I was supposed to be done, but didn’t get out until 1:30 pm, so I’m pretty sure I missed her. I don’t even know her name…

While the girl and the guy were getting their cuts in another room with the clients watching, I got an amazing shampoo. Oh my goodness, there were at least three lathers, a head massage, and a leave-in product. It was just awesome. After waiting some more, Sébastien and the other stylist came in with the two who just got their cuts, they looked amazing! So now I’m excited… and nervous! I gave him a little guidance but trusted him with what would look good on me. He did go a little shorter than expected, but I really love it!

Jessicas Before and After

So, the two volunteers (me and another girl) sat in salon chairs looking at 6 clients. We did not get to look in mirrors, but instead, I found points on the wall to look at. They would snip, snip, snip, then talk, talk, talk, then snip some more. When they were finished people came up to take photos with their camera phones and some touched my hair. It was really, really weird, but very exciting too! Based on the cost of a trip to Paris on a train and what typical salon prices are for that salon, I think it’s actually cheaper to take the train to Paris for a day and be a volunteer than to pay for a cut from a master stylist in Amsterdam!

There are plenty of ways to meet people and make friends, but I never expected for it to happen in a hair salon! And you just never know what happens when you do things other tourists don’t. It’s an amazing way to really understand the culture and get a good feel for the city. The Parisians in there were all so nice, yet they have a stereotype that they are stuck-up. Come to your own conclusions on a place and their people, don’t believe everything you hear!

Sean and Jess on a train

We are definitely planning to go back to Paris! We didn’t save up for a big trip this time…this was all about taking it in, walking around, and just being in Paris. There are bigger plans for the next trip! And maybe a haircut will be involved 😉

What’s the craziest things you’ve done on a trip that was awesome and somewhat unexpected? I really want to hear your stories! 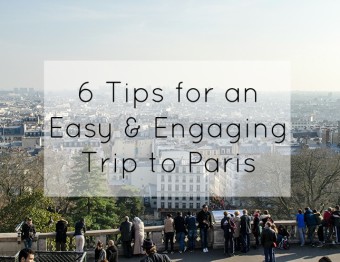 Alternative things to do in Paris
April 3, 2015